Toll from military camp blasts in E Guinea rises to 98 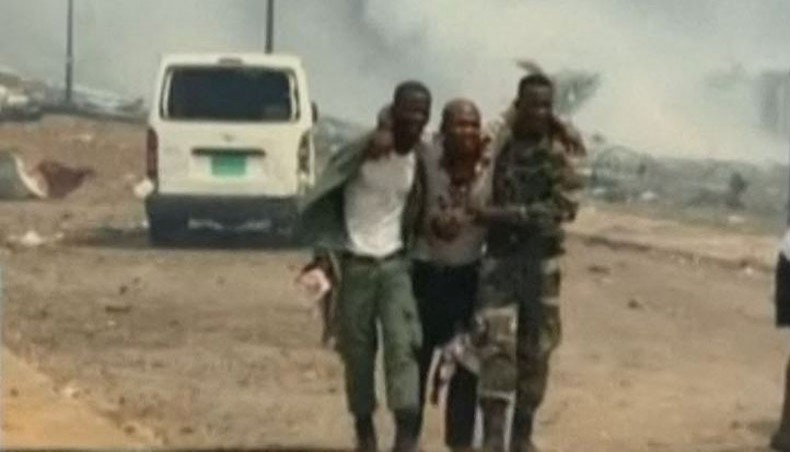 This video grab obtained by AFPTV from TVGE on March 7, 2021 shows an injured man being assisted by soldiers in Bata, Equatorial Guinea. -- AFP photo

The death toll from accidental explosions that rocked a military camp in Equatorial Guinea and the surrounding area rose sharply on Monday to 98 with hundreds wounded, the vice president said, as the scale of the disaster became clearer.

The blasts on Sunday, involving ammunition stocks and explosives at the camp in the country’s economic hub Bata, devastated buildings at the compound and houses in surrounding residential areas.

‘At the moment, we deplore 98 dead and 615 injured,’ vice president Teodoro Nguema Obiang Mangue wrote on his Twitter account.

State television has shown images akin to a war zone, in which rescue workers and civilians struggled to remove bodies from smoking ruins.

Three young children were brought out alive and taken to hospital, it said.

In a hospital in Bata, many wounded, some on the floor, received first aid.

A string of four huge explosions occurred in mid-afternoon on Sunday, hitting the Nkoa Ntoma camp, which houses special forces and gendarmes and their families, as well as homes nearby.

President Teodoro Obiang Nguema, who has ruled the small central African state for 42 years, has blamed the accident on stubble-burning by local farmers and on ‘negligent’ supervision of the camp’s munitions depot.

‘My uncle, who is an officer at the camp, has just called to say that this morning he found the bodies of five members of his family, which were totally burned,’ one Bata resident, speaking on condition of anonymity, told AFP.

Another resident, Teodoro Nguema, told AFP by phone, ‘We haven’t slept all night — the houses were burning all night long and we kept hearing small explosions.

‘Anyone living in a radius of two to four kilometres of the explosions has been unable to return home.’

Bata is home to 800,000 of Equatorial Guinea’s 1.4 million people, most of whom live in poverty despite the country’s oil and gas wealth.

The capital is Malabo, on the island of Bioko.

In a statement, Obiang said, ‘The city of Bata has been the victim of negligence by the team in charge of guarding stores of dynamite, explosives and munitions.’

‘These caught fire because of embers caused by stubble-burning in the fields by farmers, which ended up causing a series of explosions.’

The only Spanish-speaking country in sub-Saharan Africa, Equatorial Guinea is one of the most enclosed nations in the continent.

Its ruler Obiang is the world’s longest-serving sitting president and is frequently accused by rights groups of abuses.

In 1979, he ousted his uncle Francisco Macias Nguema, who had ruled the country since independence from Spain in 1968, and had him shot by firing squad.

The president’s jet-setting son is vice president with responsibility for defence and security.

On Sunday, he appeared in television footage at the scene inspecting the damage, accompanied by his Israeli bodyguards.

Teodorin, as he is known, is increasingly seen as the president’s designated successor.