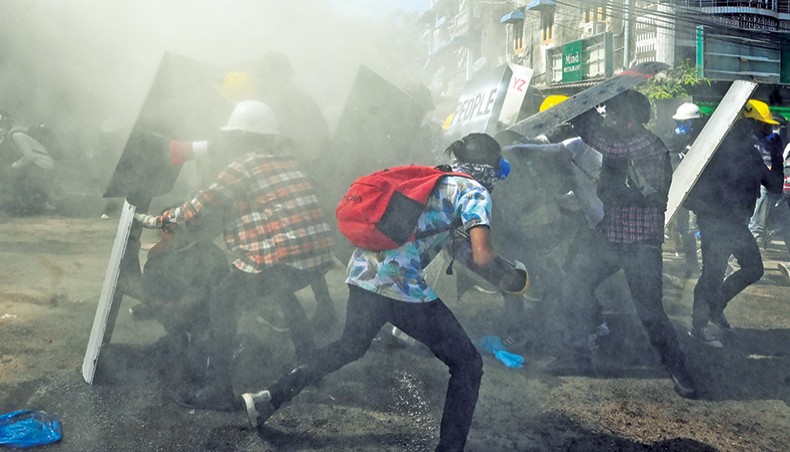 Protesters hold homemade shields after tear gas was fired during a demonstration against the military coup in Yangon, Myanmar on Monday. — AFP photo

Two anti-coup protesters were shot dead in Myanmar on Monday as demonstrators across the country sought to paralyse the economy with strike action following a weekend of night raids and arrests.

The country has been in turmoil since a February 1 coup ousted civilian leader Aung San Suu Kyi and triggered mass protests against the new military junta.

The police and military have responded with an increasingly brutal crackdown on demonstrators, with more than 50 people killed and nearly 1,800 arrested.

Despite the risk, protesters rallied in parts of the commercial capital Yangon, the second-largest city Mandalay and other towns around the country. In some areas, the authorities once again responded with force.

In the northern city of Myitkyina, security forces used tear gas and opened fire during street clashes with stone-throwing protesters.

A live Facebook stream of the incident showed protesters dragging multiple wounded comrades by the arms and legs, scrambling to get them to medical care.

There was also grisly footage of bleeding bodies lying on beds as health workers frantically tried to resuscitate them.

One man was seen in the footage lying face down, with part of his skull blown out.

‘Two men were shot dead on the spot, meanwhile three others including a woman were shot in her arm,’ a medic said.

‘We are about to send the dead bodies to the families.’

Banks, stores, shopping malls and some clothing factories were closed following an appeal by trade unions for a general strike to bring the economy to a standstill.

‘To continue economic and business activities as usual... will only benefit the military as they repress the energy of the Myanmar people,’ 18 unions said in a statement.

‘The time to take action in defence of our democracy is now.’

Unions are seeking to extend the impact of an on-going ‘Civil Disobedience Movement’ — a campaign urging civil servants to boycott working under military rule — which has already hit state machinery hard.

The impact has been felt at every level of the national infrastructure, with hospital disruptions, empty ministry offices, and banks unable to operate.

The junta has warned that civil servants ‘will be fired’ with immediate effect Monday if they continue to strike.

After a restless night with security forces sent to multiple neighbourhoods and shots heard in some areas, parts of Yangon woke to police pre-emptively breaking up protest barricades.

‘They are now using a bulldozer to remove the barriers protesters have made.’

Security forces patrolled Yangon streets inspecting the inside of motorists’ cars and demanding to see the phones of passers-by, according to an AFP reporter.

Physicians for Human Rights said it was appalled by these moves, calling them a violation of international law.

‘One eyewitness account detailed armed security forces entering and seeking to occupy West Yangon General Hospital by force,’ the group said, adding it had reliable information that five other Yangon hospitals were being occupied with similar situations elsewhere in Myanmar.

‘Even though medical personnel vacated their government posts to initiate the civil disobedience movement, many returned to government hospitals in response to escalating violence against peaceful protesters.’

The coup and subsequent crackdown have drawn widespread international condemnation as well as sanctions against key military personnel.

Canberra is reviewing its aid programme so money is channelled away from government agencies towards not-for-profit organisations.

The military, which denies responsibility for loss of life in the protests, has defended seizing power by alleging widespread electoral fraud in November’s elections, which Suu Kyi’s party had won in a landslide.+

The Nobel laureate has not been publicly seen since she was detained as the lightning coup was launched in the early hours of February 1.