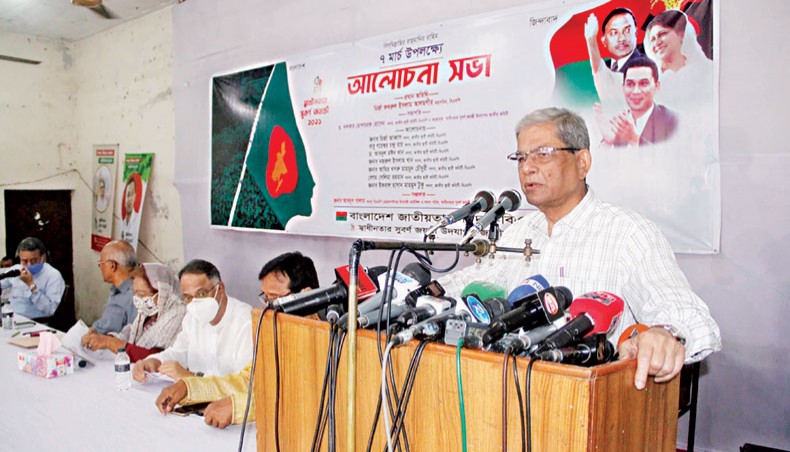 Senior leaders of opposition Bangladesh Nationalist Party on Sunday at a discussion said that in his speech on March 7, 1971 at Suhrwardy Udyan, Sheikh Mujibur Rahman did not give declaration of the country’s independence.

But a military person, Ziaur Rahman, gave the first declaration of independence from the Kalurghat radio  station on March 26, 1971, they said.

BNP’s national committee for observance of the golden jubilee of the country’s independence organised the discussion at National Press Club auditorium to mark historic March 7.

The BNP observed the day for the first time.

The committee convener and BNP standing committee member Khandaker Mosharraf Hossain, who chaired the meeting, said that in March 1971, the Awami League did not want to declare independence and they wanted to negotiate with the then rulers of Pakistan.

As a result, Sheikh Mujib had continued his talks with Yahya Khan and Zulfikar Ali Bhutto till March 25, 1971, Mosharraf said.

BNP standing committee member Iqbal Hasan Mahmud Tuku said that on March 7, 1971, people wanted that Sheikh Mujib would give declaration of independence from the rally.

But people were frustrated as Sheikh Mujib did not give the declaration of independence and in his speech, there was hint of negotiation with the rulers of Pakistan, Iqbal said.

Now, the Awami League has killed democracy in the country and is trying to continue its illegal rule applying forces, Fakhrul said.

He called on all political parties to be united to end the ‘misrule’ of the Awami League.

BNP standing committee member Mirza Abbas demanded due evaluations of the roles of Zia and Sheikh Mujibur Rahman in the liberation war.

Another standing committee member Amir Khashru Mahmud Chowdhury said that the speech of March 7 of Sheikh Mujib was one of the prominent events for the liberation war but it was not the only event.

BNP standing committee member Selima Rahman said that the government was trying to tarnish the role of Zia in the liberation war by cancelling his gallantry award.

But it would not be possible as Zia will remain in the heart of people for his prominent role in the liberation war, Selima said.