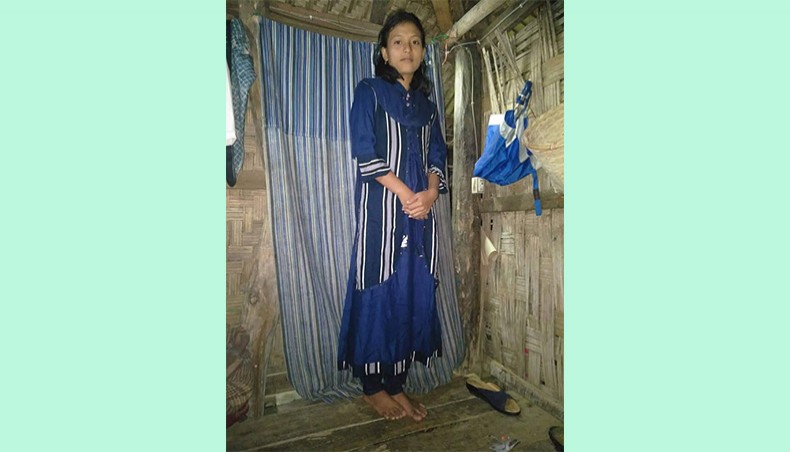 The state and its law enforcement agencies responsible for protecting the life of its citizen, failed Lakingme Chakma, but can they protect her daughter, Atifa — the daughter borne out of many injustices, the daughter she gave birth to thirteen days before her alleged murder? On the eve of International Women’s Day 2021, we must confront this piercing question, writes Nahid Riyasad

THE Shilkhali Chakma para in Teknaf, Cox’s Bazar was largely an unknown place for the everyday readers of mainstream newspaper in Bangladesh. Hidden beneath the tourist sites, Lakingme Chakma was born into a working class Chakma family. Her father Lala Ong Chakma, a fisherman, and mother Kesing Chakma is a homemaker.  They barely have a roof over their head. She was a student of grade VII of Shamlapur High School. We know nothing more about her life before her abduction, before her religious conversion, before her forced marriage. We came to know of her when local police took the custody of her dead body as her alleged abductor/husband’s family made a claim over her father’s claim. We know her as her dead body lay unclaimed for 26 days at a morgue in the Cox’s Bazar Hospital. And it speaks a volume of the prevailing Bengali chauvinism in the country.

Abducted
ON JANUARY 5, 2020, Lakingme was abducted from her Shilkhali Chakma Para home. Following her death and the news of the legal battle over her dead body, a 10-member investigation team of rights activists, indigenous community leaders, journalists and teachers went to visit her family and the site of abduction. The citizen’s investigation revealed, in a press conference on January 6, 2021 that she was kept at nearby villages until January 8. On January 9, she was taken to Shahpori island in Teknaf, where she was detained at one Kala Monu’s home for the next two days. On January 11, Lakingme was taken to Cumilla.

Lala Ong, her father was not at home at the time of abduction. He had informed the local union council member Md Hafeez about the matter and requested to rescue his daughter. However, the UP member did not take any action. Later, Lala Aung started looking for his daughter in different places. He even met Ataullah’s relatives to resolve the matter but failed. Lakingme’s father then tried to file a kidnapping case at the Teknaf police station, but the-then officer-in-charge, now accused of killing Major Sinha, Pradeep Kumar Das refused to file the case. A helpless father was forced to file a General Diary. As the police did not take any action, the father finally filed a case with the Cox’s Bazar Women and Children Repression Prevention Tribunal on January 17. The tribunal asked the Police Investigation Bureau to investigate the case. At least five witnesses in their statements to PBI said Lakingme was picked up from her house. On August 9, 2020, the PBI, however, submitted the probe report to the tribunal stating that the allegation of abduction was not found to be true.

Murdered
ON DECEMBER 10, 2020, after 11 months and six days, police called in Lala Ong to identify his daughter’s body in Cox’s Bazar hospital morgue. On December 10, 2020, a few people brought Lakingme Chakma to the emergency room of the hospital and said she had taken poison, Cox’s Bazar Sadar Hospital resident medical officer, Dr Shaheen Md Abdur Rahman Chowdhury said. After examining Lakingme, the duty doctor declared that she had died before she was brought to the hospital and informed the police.

Police then sent the body to the morgue for an autopsy. They, however, did not hand him over her body saying the girl was married to one of her alleged abductors who managed a birth certificate that says she was 18. On December 15, Lala Aung appealed to the Teknaf Judicial Magistrate’s Court to hand over Lakingme’s body to him. The court accepted the application after hearing the case and directed RAB to take necessary steps in this regard. It is to be noted here that sources in the locality where she was kept claimed that she had been tortured and poisoned to death.

Converted
HER abductor/in-laws family submitted documents to the law enforcement agencies, claiming that they got married through notarised affidavit at the judge court. They also claimed to have a ‘birth certificate’ that said she was 18. The notarised document said that Lakingme preferred the rituals and beliefs of Islam over her the religion she was born into, Buddhism. Reading the Bengali version of the holy Quran and hadith, she felt the calling. On January 21, 2020, following the religious conversion, Lakingme aka Rahima Khatun was subjected to a marriage with one of her alleged abductors.

When human rights organisations began to demand the punishment of the marriage registrar for conducting a marriage of an underage girl, the registrar in question from Cumilla City Corporation told media that he recorded the marriage in a lawyer’s chamber at Cumilla Bar Association building and that they were his walk-in clients and he did not verify the birth certificate or any other legal documents. The lawyer, who had notorised the conversion, also said the same. All involved in the process failed in dispensing their mandated duty.

During the RAB investigation, they scrutinised Lakingme’s birth certificate, medical report and other documents and found that she was an underage girl. On ground that a marriage with an underage girl is illegal, 26 days after her death, authorities concerned handed her dead body over to her father. The family came to the Cox’s Bazar hospital morgue again, but they cannot afford to pay the morgue fee, the fee Lakingme incurred while lying dead in the morgue as the battle over the custody of her dead body continued. In a ‘humanitarian’ gesture, RAB paid the morgue fee and she was finally cremated at Zadimura Central Boudha Crematorium on January 4, 2021. In front of the morgue, an inconsolably wailing mother and an aggrieved father told media, ‘we are poor, don’t even have the money to pay the morgue, we want justice for our daughter.’ The case of Lakingme’s abduction, murder and forced religious conversion and child marriage are pending investigation. The question remains how long the investigation will remain pending, whether Lakingme’s case will follow the pattern that was/is evident in other reported cases of violence against women from ethnic minority communities.

According to the statistics of Peoples Pact and International Work Group for Indigenous Affairs, at least 54 cases of violence against women from ethnic minority communities were reported in 2020. Of these, 35 were reported in the plains and 19 in the Chittagong Hill Tracts. At least five of the women were sexually or physically assaulted in these incidents. At least 18 women were raped, and attempted rape was committed against another 14. The way we did not know of Lakingme Chakma before her death, in the same way, we don’t know about the progress, if any at all, in dispensing justice for these women. The state and its law enforcement agencies responsible for protecting the life of its citizen, failed Lakingme Chakma, but can they protect her daughter, Atifa ‒ the daughter borne out of many injustices on her mother, the daughter she gave birth to thirteen days before her alleged murder? On the eve of International Women’s Day 2021, we must confront this piercing question.