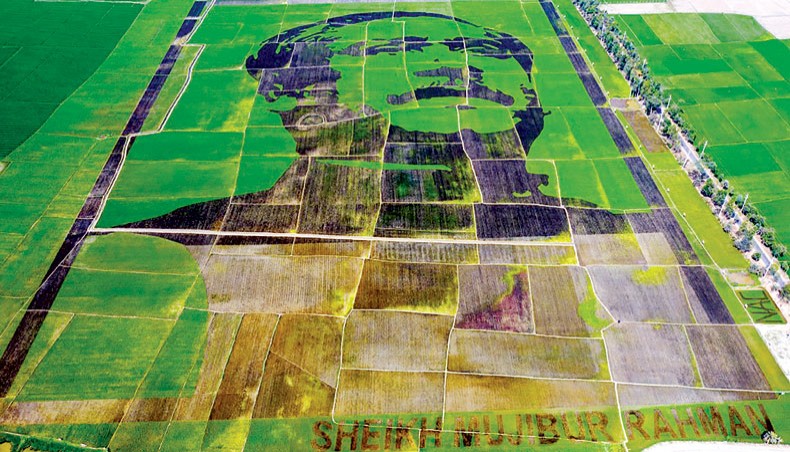 In this aerial photograph taken on March 2, 2021 shows a representation of the portrait of Bangladesh’s founding president Sheikh Mujibur Rahman made with paddies on around 400-metre-long and 300-metre-wide in a field of Sherpur upazila in Bogura. — AFP

A giant portrait of Bangladesh’s founding president Sheikh Mujibur Rahman made from rice paddies has drawn hundreds of visitors as the country gears up to celebrate its 50th anniversary of independence this month.

The 400 metre-long portrait was created from planting purple and green rice over the 13 hectares (33 acres) of land.

Sheikh Mujib, as he is known, was born a century ago, and was a central figure in Bangladesh’s war for independence from Pakistan that ended 50 years ago. He became the country’s first leader but was assassinated during a military coup in 1975.

Last year, the prime minister unveiled plans for mass celebrations to mark the centenary birthday of Sheikh Mujib and 50 years since the founding of Bangladesh.

Since then, hundreds of sculptures and murals of Sheikh Mujib have been appearing across the country.

‘People come from all over the country. Since the portrait became visible last month, every day we have got hundreds of visitors,’ Mohammad Asaduzzaman, a manager of National AgriCare, the company behind the giant portrait, told AFP.

The firm imported Chinese purple seeds to add to the local green variety and recruited fine arts students, hundreds of volunteers and rural workers to make the portrait.

‘He is our father of the nation. We got independence thanks to him,’  Shrimoti Mayrani Robidas, one of the workers, told AFP.

‘It felt so good when we planted the rice which became his ear, his nose and face. We heard he loved farmers. He is like life and death to us.’

Although the commemorations have been overshadowed by the coronavirus pandemic, the government has embarked on a mass building of murals and memorials to honour Sheikh Mujib.

This month, visits from the leaders of India, the Maldives and Nepal will kickstart the main celebration events.

But hardline Islamists have expressed anger at a planned new sculpture of Sheikh Mujib on a main road in central Dhaka, warning they will pull it down.

Islam forbids all forms of idolatry and Islamists have in the past opposed statues and sculptures in public places.

The latest threat has prompted police to increase security around more than 1,220 murals and monuments to the former leader, many of them put up during the incumbent prime minister’s last 12 years in power.

A police official told AFP that 24-hour security had been posted at two murals of Sheikh Mujib at a major bridge at Tangail, northwest of Dhaka.