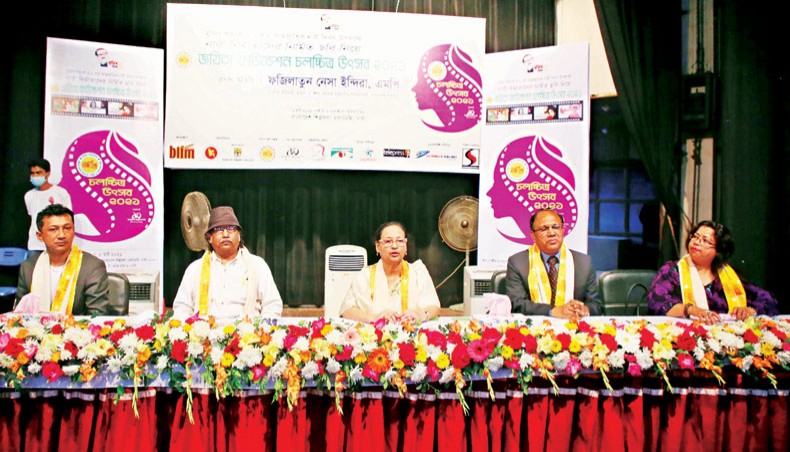 Guests and organisers pose for a photo at the inaugural ceremony of three-day Joyeeta Foundation Chalachchitra Utsab 2021 at Music and Dance Centre of Bangladesh Shilpakala Academy on Saturday. — Sony Ramany

The event is sponsored by Joyeeta Foundation. It is featuring six films.

State minister for women and children affairs Fazilatunnesa Indira inaugurated the festival as chief guest while additional secretary and project director of Joyeeta Foundation Md Abdur Rouf was present as special guest at the event.

Actress Shahnoor, poet-playwright and journalist Raju Alim and others spoke at the event.

‘Women are working alongside men in every sector. It is a matter of great joy that many young female filmmakers in the country are making films nowadays. I urge them to make more films on the War of Independence, Bangabandhu and Bangamata,’ said Fazilatunnesa Indira.

Md Abdur Rouf said, ‘I am happy because a film festival is being held amid the on-going COVID-19 crisis. Joyeeta Foundation has sponsored the festival. The organisation will continue supporting female filmmakers in the coming years.’

Shahneoyaj Cacoly said, ‘I feel honoured to be named for the award. Earlier, I have received the National Film Award. I thank the organisers for honouring me.’

Shahneoyaj Cacoly-directed Uttarer Sur and Nanziba Khan’s The Wanted Twin will be screened on the concluding day at the festival.

The films are being screened from 3:00pm to 9:00pm. The festival will end on Monday.