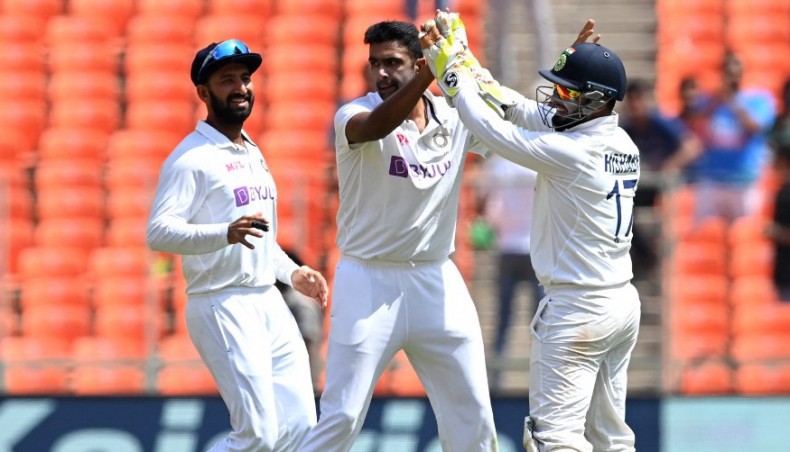 India's Ravichandran Ashwin (C) celebrates the wicket of England’s Zak Crawley with team-mates on the third day of their fourth Test at the Narendra Modi Stadium in Motera on Saturday. — AFP photo

India's Ravichandran Ashwin says life in a coronavirus bio-bubble made players bond better as they bounced back from an opening-match loss against England to clinch the Test series 3-1 on Saturday.

The hosts crushed England by an innings and 25 runs inside three days of the fourth Test in Ahmedabad to book a meeting with New Zealand in the World Test Championship final.

Ashwin, 34, and fellow spinner Axar Patel took five wickets each to bundle out England for 135 as India won another quick game after their two-day victory in the day-night third Test.

The veteran off spinner topped the bowling chart with 32 wickets to be named man of the series.

Since cricket returned from a pandemic-induced hiatus last year, Indian cricketers have been confined to their hotel rooms, practice areas and team buses, to avoid infection.

Most international players have been in one bubble or another, with only small breaks in between, since before the Indian Premier League began in September followed by the Australia tour until January.

‘Life inside a bio-bubble is not easy at all,’ Ashwin told reporters.

‘The last eight months have been hard yes, but I think the team morale and team spirit and also the kind of bonding that teams build because of this bio-bubble is something that I have not experienced in the decade of cricket that I have played.’

He added: ‘I think some of those comebacks and difficult situations that we have played has not come as a surprise because we have generally bonded together and got some special results.’

‘Congratulations Team India for winning the series and getting to the finals of WTC,’ Ganguly wrote on Twitter.

‘It's a monumental effort to be in the bubble for so long and still play such good cricket for last 5months .. outstanding.’

Ashwin went past 400 Test wickets in the day-night game to become India's fourth bowler in the club after Anil Kumble (619), Kapil Dev (434) and Harbhajan Singh (417).

Ashwin said it was humbling to be compared to the greats of the game, but that he wanted to leave his ‘own legacy’.