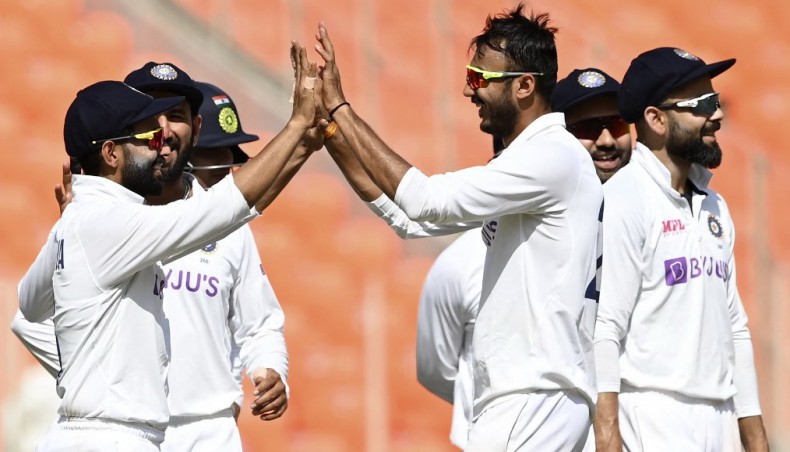 India's Axar Patel (C) celebrates the wicket of England's Ben Foakes with team-mates on the on the third day of their fourth Test at the Narendra Modi Stadium in Motera on Saturday. – AFP photo

Spinners Ravichandran Ashwin and Axar Patel took all 10 wickets on Saturday as India crushed England inside three days to win the fourth Test and seal the series 3-1.

After the latest emphatic innings and 25-run victory, India captain Virat Kohli hailed the way his side came back from a game down to dominate the series and book their place in the World Test Championship final against New Zealand.

India completed three victories in only nine of the 15 days available.

‘The comeback in Chennai (the 2nd Test) pleased me the most. The first game was an aberration and England outplayed us,’ Kohli said.

‘We bowled and fielded with more intensity and so the comeback was very heartening. Our bench strength is extremely strong and that's a good sign for Indian cricket.’

England captain Joe Root admitted his side, who suffered a two-day humiliation in the third Test, had been ‘outplayed’ again.

‘There are a few key areas of the games where India managed to grab them and we didn't,’ he said.

Ashwin bowled Dan Lawrence for 50 and ended England's second innings on 135 to seal the match, in the world's biggest cricket stadium in Ahmedabad.

Ashwin, who was named player of the series, led the bowling chart with 32 wickets followed by Patel, who played one game fewer, on 27. England spinner Jack Leach was third with 18 scalps.

Kohli praised Rohit Sharma for his 161 which proved decisive in the second Test in Chennai and Ashwin, who he described as India's ‘most bankable player over the years’.

This win was set up by wicketkeeper-batsman Rishabh Pant, who made 101 on day two, and Washington Sundar, who hit an unbeaten 96 as India made a commanding 365.

Pant scored his third Test ton in a 113-run stand with Sundar to lift India from a precarious 146-6 in response to England's first innings of 205.

India coach Ravi Shastri singled out Pant's performance with the bat and behind the wickets as ‘magnificent’.

‘He was told in no uncertain terms that he has got to respect the game a little more. He's got to lose a bit of weight and work hard on his keeping,’ said Shastri.

‘Yesterday's innings was the best counter-attacking innings I have seen in India. He built a partnership with Rohit playing against his nature - to do that is not easy.’

Sundar kept up the attack as the final three wickets fell on Saturday morning but ran out of partners and remained four shy of his century.

England lost early and regular wickets to go down tamely in 54.5 overs.

Ashwin struck twice on successive balls to send back Zak Crawley for five and Jonny Bairstow for nought. It was Bairstow's third duck in four innings.

Patel got opener Dom Sibley for three and then Ben Stokes for two after the left-hand batsman miscued a sweep and was caught at leg gully by Kohli.

Ashwin took the prized scalp of skipper Joe Root for 30 to virtually end England's hopes. The visitors have scored more than 200 just once in their last six innings.

England fast bowler James Anderson made an impression with his three wickets and 14 maidens in 25 overs.

Root topped the batting chart with 368 runs, including 218 in the opening Test that England won convincingly.

‘It is very important that we become a better side from this experience and this series and we keep looking to evolve and move forward,’ said Root.