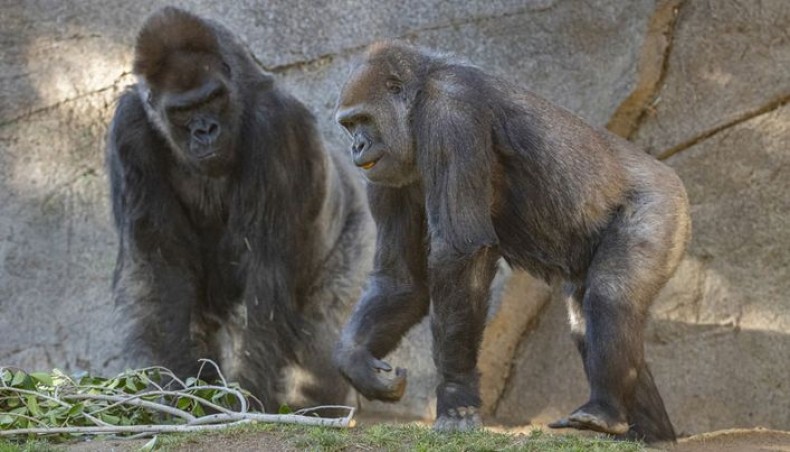 Four orangutans and five bonobos were given two doses each of an experimental vaccine created specifically for animals by a veterinary pharmaceutical company.

The inoculations were carried out after eight gorillas at the same world-famous zoo contracted the virus from human staff in January.

‘After a troop of eight western lowland gorillas got sick in January, San Diego Zoo staff received experimental COVID-19 vaccines to give to great apes in their care,’ tweeted Zoetis, the pharmaceutical company.

San Diego Zoo Wildlife Alliance on Friday called it a ‘win for science.’

Nadine Lamberski, a conservation and wildlife health officer at San Diego Zoo Global, told National Geographic that the use of an experimental vaccine on the zoo’s animals at this stage ‘isn’t the norm.’

‘In my career, I haven’t had access to an experimental vaccine this early in the process and haven’t had such an overwhelming desire to want to use one,’ she said.

One of the orangutans vaccinated, named Karen, has already made medical history in 1994 as the first in the world to undergo open-heart surgery.

The gorillas were not vaccinated as it is assumed they have developed antibodies following their infection earlier in the year.

It was the first known case of natural transmission of the virus to great apes, and was suspected to have occurred because of contact with an asymptomatic staff member, despite the use of personal protective gear.

One elderly gorilla, Winston, recovered from a serious case of COVID-19 after he was treated with cutting-edge synthetic antibodies.

Like the vaccines, Winston’s treatment came from a supply not permitted for human use.

Veterinarians routinely vaccinate wildlife against a range of diseases, both in captivity and in their natural environment.

The vaccine had previously been tested on cats and dogs.