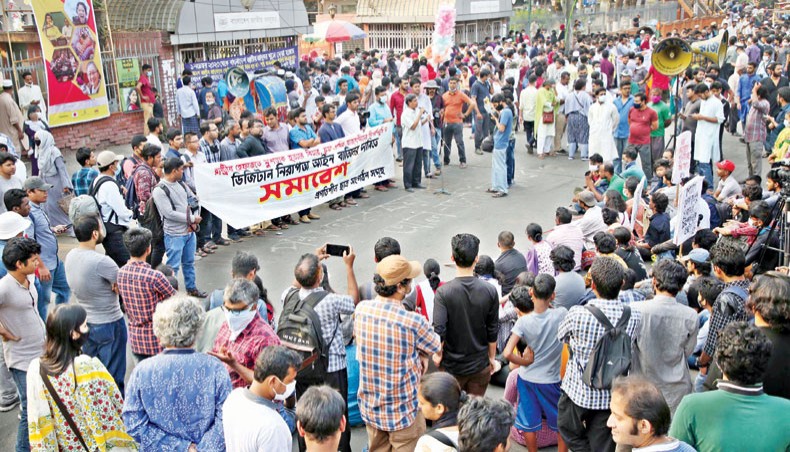 Progressive student organisations hold a rally at Shahbagh in Dhaka on Friday demanding the repeal of the Digital Security Act. — New Age photo

Protestors in Dhaka and elsewhere in the country on Friday demanded a judicial probe into the death of writer Mushtaq Ahmed in jail custody, the torture meted out to him and cartoonist Ahmed Kabir Kishore in custody, scrapping of the controversial Digital Security Act.

The protesters also demanded the release of protesters arrested in Dhaka and Khulna as well as all those arrested under the DSA across the country.

Mushtaq, who had been detained under the DSA in early May 2020 for his social media posts criticising the government, was denied bail six times during his nine-month-long detention and died in Kashimpur High Security Prison on February 25.

Cartoonist Kishore, a co-accused in the case who had been shown arrested on the same day, was released on bail on Thursday and he had to be immediately hospitalised.

Kishore alleged that he was tortured in custody.

Different political, rights, student and socio cultural organisations have been protesting against the death of writer Mushtaq Ahmed since February 26 and demanding that the DSA should be repealed.

At capital’s Shahbagh, different left and progressive organisations held demonstrations in front of the National Museum in the afternoon and condemned the death of Mishtaq and custodial torture meted out to cartoonist Kishore and demanded the release of the activists arrested for protesting against Mushtaq’s death.

Seven student activists were arrested from a procession on the Dhaka University campus on February 27 evening and they are now in jail as the court rejected their bail petition.

Another activist Ruhul Amin was arrested in Khulna under the DSA for posting on Facebook comments on the writer’s death.

Attending the Shahbagh rally, Dhaka University professor Tanjim Uddin Khan said that the government had long been trying to suppress their political opponents with repressive measures and now they were using the DSA to curb people’s rights to speak and criticism.

He said that the fascist state was using the DSA to kill people. What would the outcome be of raising questions about the law after the prime minister’s comment that it was a natural death, he asked.

Tanjim Uddin also said that after such a declaration by the prime minister, the probe becomes dispensable.

Samajtantrik Chhatra Front central president Masud Rana said that they would not accept any amendment to the DSA saying that it was designed to save the ruling quarter and repress the people.

Referring to custodial torture meted out to cartoonist Kishore, he said that the incumbents are using the same method of tortures and repressions used by the Pakistani regime.

He said that they would go for wider movements across the country if the DSA is not scrapped, people arrested under the act are not released, and activists arrested for protesting against Mushtaq’s death are not released.

Nari Samhati held another rally at Shahbagh where speakers also demanded that the DSA should be scrapped while they also voiced their concerns over the rights of women in society.

Addressing the rally, writer Rehnuma Ahmed said that the incumbent were dividing people by using the categories such as pro-liberation and anti-liberation forces for their own political gains.

She expressed frustrations over the fact that a large number of writers and cultural activists were not taking to the streets against the DSA in the wake of Mushtaq’s death.

She said that these people could have been termed as Rajakars if the liberation war was taking place now.

In the morning, addressing a rally at the National Press Club in the capital, senior leaders of the Communist Party of Bangladesh demanded the release of the student leaders arrested from the torch procession organised to protest at the death of writer Mushtaq Ahmed in jail.

They also demanded the immediate repeal of the DSA terming it a ‘draconian law’ used to stop the voices of the opposition parties.

CPB president Mujahidul Islam Selim alleged that the Awami League government did not tolerate criticism and it is using the DSA to gag the voices of the opposition.

In Chattogram, rights activists, professionals and different organisations in a rally in Friday afternoon in front of the Chattogram Press Club, under the banner of ‘Platform against oppression and suppressive laws’, demanded justice for the death of writer Mushtaq Ahmed, scrapping of the DSA and the release of the arrested protesters in Dhaka and Khulna as well as all those arrested under the DSA.

Later, they brought out a procession from the venue at about 6:00pm which paraded through Jamalkhan and Cheragi Hill area.

Bangladesh Labour Rights Council holds a rally at Shahbagh in Dhaka on Friday demanding the release of workers leader Ruhul Amin and the repeal of the Digital Security Act. — New Age photo

Communist Party of Bangladesh leaders and activists march along Topkhana Road in Dhaka on Friday demanding the release of student leaders arrested under the Digital Security Act. — New Age photo