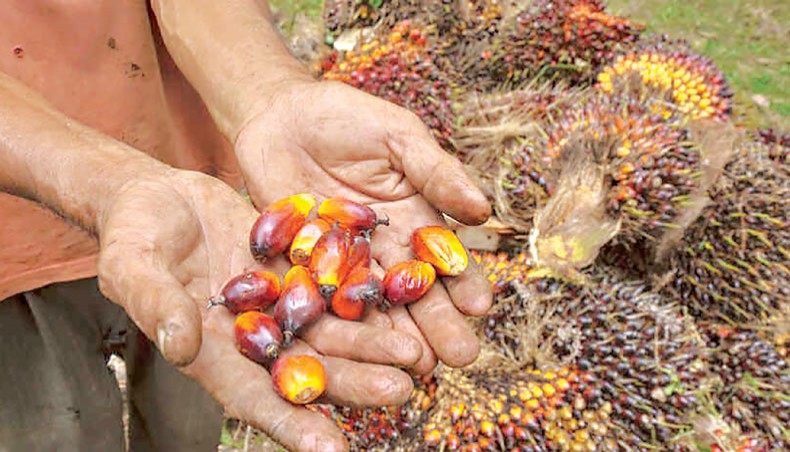 A file photo shows a palm oil farmer displaying palm oil seeds in Kampar, Riau province, Indonesia. Switzerland votes on Sunday on a free trade deal with Indonesia but the agreement, which opens up a vast potential market, could slip up over the issue of palm oil imports.  — AFP photo

Switzerland votes on Sunday on a free trade deal with Indonesia but the agreement, which opens up a vast potential market, could slip up over the issue of palm oil imports.

Under the deal, tariffs would be gradually removed from almost all of Switzerland’s biggest exports to the world’s fourth most populous country, while the Swiss would abolish duties on Indonesian industrial products.

Anyone importing Indonesian palm oil must prove that it meets certain environmental and social standards.

But controversy around palm oil and its sustainability fuelled enough concern in Switzerland to trigger a public vote.

Two separate polls in February put support for the deal at 52 per cent, with 41 to 42 per cent against.

The agreement was signed in 2018 and approved by the Swiss parliament in 2019, but opponents were especially critical of Bern’s move to reduce import duties on palm oil.

For palm oil, customs duties will not be removed but instead reduced by between 20 per cent and 40 per cent.

These reductions will only be granted on a volume limited to 12,500 tonnes per year — and importers will need to prove that the palm oil has been produced in a sustainable manner.

Campaign posters backing the economic partnership agreement show a Swiss bear hugging a tiger, while those against show an orangutan and baby clinging to a tree trunk, surrounded by flames.

The agreement aims to boost ties with Indonesia, which despite its population is only Switzerland’s 44th biggest economic partner, and only its 16th biggest export market in Asia.

‘This is the first time that the people will be called upon to vote on a trade agreement,’ Swiss president Guy Parmelin said during a press conference on the vote.

Switzerland relies on around 30 such agreements which do not normally pose a problem, he said.

However, Parmelin called the vote an opportunity not only to respond to ‘legitimate concerns’ but also to ‘de-demonise free trade’.

He said that such deals were of ‘paramount’ importance for an export-led economy like Switzerland, which lacks both significant natural resources and a large domestic market — and draws almost half its national income from abroad.

Without an agreement with Indonesia, Swiss companies would be put at a disadvantage, the president  insisted, noting that the European Union is also negotiating a deal with Jakarta.

The government recommends voting for the deal, highlighting the restrictions put in place to ensure the sustainability of imported palm oil.

However, the agreement’s opponents are far from convinced.

Palm oil is a key ingredient in a wide range of products from food to cosmetics but it has long been controversial.

Environmentalists say that it drives deforestation, with huge swathes of rainforest logged in recent decades to make way for plantations.

‘Palm oil is an emblematic product of free trade,’ Willy Cretegny, an organic winegrower who brought about the drive for a vote, told AFP.

He convened a committee comprised of Greens, young Socialists, and agricultural organisations and unions.

In opposing the deal, he cited deforestation, human rights and environmental violations, and also the certification criteria for palm oil itself.

‘The number one problem with free trade is that it is a tool to encourage consumption, even over-consumption,’ he added.

Cretegny questioned the ‘aberrations’ of a set-up focused on exports — to the detriment of subsistence agriculture for domestic consumers.

‘We put fallow land aside in Switzerland, and we deforest elsewhere. It doesn’t make sense,’ he said.