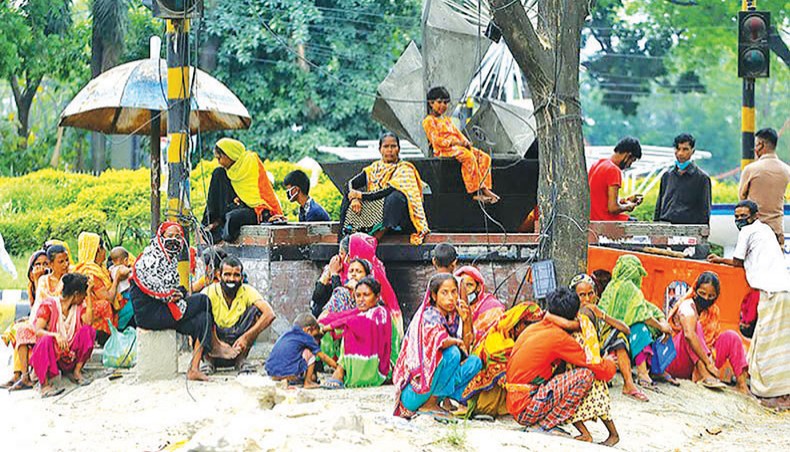 A file photo shows relief-seekers waiting on a street island near the National Press Club in Dhaka as the COVID-19 outbreak pushed the poor to streets to receive food from donors.Deposits in Tk 10 bank accounts dropped by 80.82 per cent or Tk 163.4 crore year-on-year at the end of December 2020 as poor people had to spend the last of their savings to survive the coronavirusinduced economic hardship.— New Age photo

Deposits in Tk 10 bank accounts dropped by 80.82 per cent or Tk 163.4 crore year-on-year at the end of December 2020 as poor people had to spend the last of their savings to survive the coronavirusinduced economic hardship.

As per the Bangladesh Bank data released on Thursday, the deposits in the accounts, which were generally opened for Tk 10 as deposit to receive the government’s assistance, dropped to Tk 202.19 crore at the end of December 2020 from Tk 365.59 crore a year ago.

‘The drop in their bank savings can be termed as dissaving,’ said Zillur, adding, ‘It’s very clear, the poor have used their savings to survive the pandemic.’

While the poor had to use the last of their savings to survive amid the coronavirus-induced economic hardship, the number of bank accounts with deposits of more than Tk 1 crore increased by 3,651 during the January-September period of the year 2020, indicating a rise in inequality and rapid wealth accumulation by the rich.

Asked about the surge in such accounts during the coronavirus outbreak, Zillur said, ‘As far as economic analysis goes, it’s not very clear as our economy has suffered shocks following the COVID-19 outbreak.’

Some of the economic sectors, including online business, might have done well but a deeper analysis is needed to understand the real reasons, the economist said.

In light of a non-economic analysis, corruption, among other things, could be a reason for the rise in the number of such accounts, he said.

The South Asian Network on Economic Modeling recently conducted a survey to understand the economic shocks of the COVID-19 outbreak on poverty and livelihoods in Bangladesh.

Average per capita household expenditure in 2020 decreased by 45 per cent, 29 per cent and 17 per cent in extreme poor, moderate poor and vulnerably poor households respectively compared with that in 2018.

The central bank report showed that the number of bank accounts owned by the extreme poor increased by 7.4 per cent year-on-year to 28.59 lakh at the end of December 2020 from 26.62 lakh a year ago.

Of these, accounts owned by 10.41 lakh extreme poor people, who used their accounts for receiving assistance from the government, had Tk 78.36 crore in deposits in their accounts at the end of December 2020.

In December 2019, deposits in 7.85 lakh extreme poor people’s accounts, which were used for receiving government assistance, was Tk 287.62 crore.

In 2020, an analysis done by the Centre for Policy Dialogue revealed that Bangladesh’s national poverty rate rose to 35 per cent in 2020 from 24.3 per cent in 2016 due to the adverse impacts of the coronavirus outbreak.

Under the Gini coefficient, zero represents absolute equality and one represents extreme inequality.

Currently, 3.40 crore people or 20.5 per cent of the population in the country is poor, according to the Bangladesh Bureau of Statistics.

Disruption in economic activities amid the COVID-19 outbreak has led to losses of employment, leading to reduced incomes for a large section of the population, the CPD noted.