Our children are crying 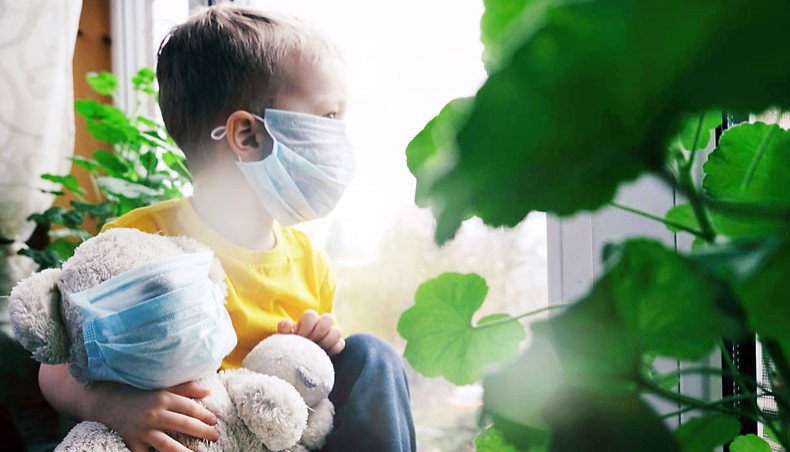 However, the dark forces of the global cabal, the deep state, have plunged humanity — all 193 UN member states at once, into a global catastrophe of epic proportions. To break that globalist spell and to get out of the disaster still unfolding, the world needs thinking people, courageous people, informed and awakened people; people who are not afraid to swim against the stream, to stem the ever-increasing flow of misinformation and government and media lies. It takes educated people. It takes people who dare to resist.

We are experiencing today just the contrary. The minute global elite that has taken a COVID-19-stranglehold on the world’s 7.8 billion people, is doing everything to keep our children, the generations that are supposed to lead the world and humanity into a bright future, uneducated, scared, socially unfit to communicate, to take initiatives, to lead. Today’s youth is depressed by this constant fear propaganda, by the authorities’ rules of confinement, not being able to see their friends, to play with them, communicate with them, to do the healthiest social activities there are — exchanging ideas with peers, acquaintances and friends.

One might think, there is a purpose behind it all. Could it be, that this minute diabolical globalist cabal, those who are behind the ‘great reset’ — co-authored by the WEF’s founder and chief executive officer since the non-governmental organisation’s creation in 1971, Klaus Schwab — could it be that these people have a plan, namely to leave the world to a generation of uneducated, fear-indoctrinated people, who are used to and have been trained to follow orders, obey authorities and believe their very leaders’ lies and fall for their manipulations?

It doesn’t take rocket science to believe that this could, indeed, be part of the cabal’s demonic plan: breaking our society apart. Leaving behind no natural and new leaders to shape the world according to the real needs of the people, of our children — not the imposed ‘needs’ of an egocentric dictatorial cabal.

IN A new book (in German), Generation Mask — Corona: Fear and Challenge (Generation Maske — Corona: Angst und Herausforderung), the immunologist and toxicologist professor Stefan W Hockertz illustrates the plight of our children in this artificially induced age of the coronavirus. He asks in particular the question, what does this pandemic — better called plandemic — do with our children and adolescents?

They are being flooded by autocratic measures they do not understand, like being forced to cover their faces by wearing masks in school, it’s like a forced hiding of their identity from their friends and peers; being obliged to follow strict rules of social distancing — don’t get close to your friend, for the protection of your health, you need a distance to your friend, you can no longer freely communicate, and even if you could, due to the covered face, you could not read your friends facial expressions — which is key to any useful conversation, between kids as well as adults.

Our kids in the west are being fear-induced and permanently indoctrinated, by radio, TV broadcasts, by permanently having to listen to case figures, infections, hospitalisations and death rates. Never mind, that most of these figures are false or distorted, made even more meaningless by absurdly obsessive testing-testing-testing.

To crown it all off — newspapers and magazines depict pictures of coffins, not one or two, but hundreds, mass graves — they are utterly disturbing for adults, let alone for children — fear is being weaponised and replaced by more fear — followed by depression, the perspective of no future — and often and ever more frequently ending in suicide, children’s, adolescents’ suicides are skyrocketing.

Children, who are the least vulnerable to the COVID-19 disease, are forced into mass testing, entire communities, by order of the mayor or the governor — all the way to kindergarten. Testing with hurtful nasal swaps, as often as once or twice a month, and if positive — high percentages of these PCR tests, so far the only COVID-19 test method available in the west — are false positives.

The Polymerase Chain Reaction test is a technique used to ‘amplify’ small segments of DNA. If over-amplified, the test results become positive, false positives. Maybe there is a purpose for over-amplifying — increasing the ‘case figures’, justifying more repression. If one kid tests positive in one of the periodic school tests — the entire class is ordered into quarantine, schooling from home, via computer, Skype, and Zoom.

That’s in the wealthy west. What about in the global south, where not everybody can afford the necessary electronic equipment for ‘home-schooling’? — There will simply be no schooling, no learning — no interchange with classmates. No education.

Testing is traumatic, especially for young children. It is hurtful and scares a kid on several levels, physically — a swap-stick deep into the upper nose, into the sinus cavities, is hurtful and can be even traumatic for children; and psychologically, what if I’m positive? ‘All my school mates and teachers have to stay home because of me’; or ‘I could infect my parents and frail grandparents’. Guilt is everywhere. Guilt is like fear. It makes people pliable, manipulable — takes all initiative and enthusiasm for life away.

For many kids this continuous repression makes them aggressive, frustrated and eventually so depressed; many see no way out as they see no future in their lives. They are crying from despair, crying from fear, crying from isolation — crying for not being able to congregate with their friends, classmates and peers — and crying for seeing no way out.

What is being done to our children is inhuman. The unilateral, viciously applied repressive measures of confinement, not being able to physically go to school and mix and exchange with friends is destructive. It may leave a deep dent in the social and psychological fabric and subsequent behaviour of this future post-COVID-19 generation.

First, they destroy the world’s economy in proportions never seen in recent history, then they destroy our future generations — so there are no flag-bearers of a new generation into a bright future, once we, our children’s parents, have disappeared out. Our children are being primed as slaves for a minute diabolical elite, to become transhumans for the great reset.

IN HIS book, Dr Stefan Hockhertz articulates these concerns and worries of the children, for parents, teachers and authorities to understand them. With the objective of stemming against this catastrophically oppressive trend, Dr Hockhertz also uses the book to uncover lies and manipulations of governments and the media. He corrects false information and outright lies, but also invites to a dialogue for bringing about more objectivity and less dictatorial rules. After all, this is not a deadly pandemic, but has developed into a plandemic — where clearly a set of different, societally harmful objectives is being played out — and relentlessly pursued.

As an immunologist and toxicologist, Dr Hockhertz also corrects the highly propagated alleged over-fatality and informs about the dangers of the ‘vaccines’, especially the RNA-based inoculations. He warns against these vaccines — which, in fact, are no vaccines, but rather gene-therapy injections. They have not been sufficiently researched and tested to be considered safe. To the contrary, primary inoculation results are disastrous in terms of serious side effects and death rates. And this only after less than six months into a worldwide vaccination campaign.

The paper points to the potential medium- to long-term disabling neurological effects, especially degenerative diseases that may be linked to RNA-based inoculations. This would be disastrous for children. Entire generations could be wiped out, so to speak.

We must not allow this to happen. We must listen to our children’s grief. We must clear the path for a bright future for our children, for our successor generation and for the future of humanity.