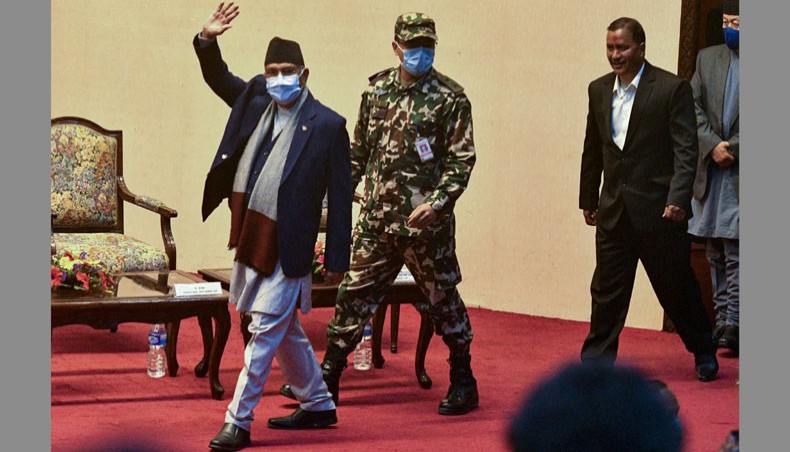 An outlawed Maoist group accused of staging several attacks signed a peace deal with Nepal’s communist government on Friday, bringing an end to the country’s only active insurgency.

Jubilant prime minister KP Sharma Oli hailed the deal as ‘historic’ at a gathering with the group’s leader Netra Bikram Chand, who came out of hiding for the signing.

Nepal has enjoyed relative peace since 2006, when a decade-long civil war ended and most rebels joined mainstream politics.

But some hardline guerrillas formed a new Communist Party of Nepal, accusing their former leaders of betraying their revolutionary cause.

The group was banned in 2019 after it was implicated in an explosion in Kathmandu that killed one person, and it has also been accused of several attacks and extortion.

The Nepali government Friday agreed to lift a ban on the group, release jailed party members and drop charges against them, leaving no other major rebel groups active in the country.

‘Nepal has entered a peaceful era, there are no more violent conflicts,’ Oli said.

The deal comes as the prime minister struggles to secure political support after his decision to dissolve parliament and call elections was overturned by the Supreme Court last week.

That came after months of clashes with another former Maoist rebel leader, Pushpa Kamal Dahal, who helped Oli come to power when their parties merged in 2018.

Guna Raj Luitel, editor of Nagarik newspaper, said the agreement was likely an attempt by the prime minister to shore up his flagging political support.

‘It is definitely a positive event, but the timing puts a question on how sincere all the parties are.’