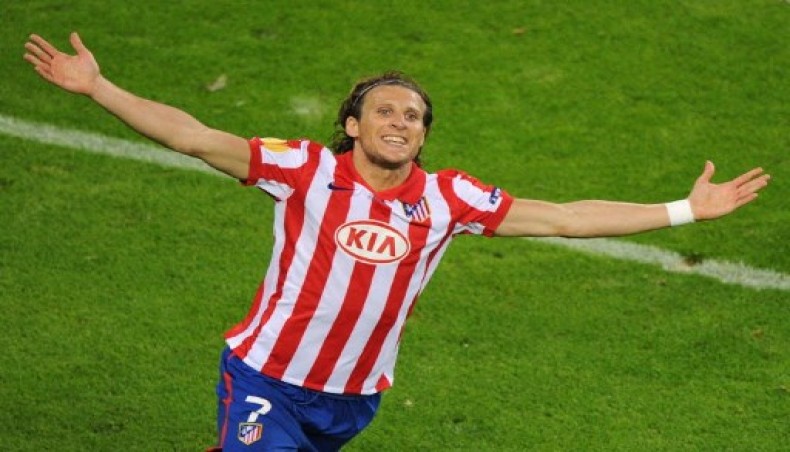 In this AFP file photo taken on May 12, 2010 Atletico Madrid's then Uruguayan forward Diego Forlan celebrates after scoring during the final football match of the UEFA Europa League Fulham FC vs Aletico Madrid in Hamburg, northern Germany.

‘Of course it was a huge mistake,’ Diego Forlan says. ‘As soon as Barcelona said he was for sale, I knew it was a mistake.’

Forlan goes back a long way with Luis Suarez, to 2007 when he set up Suarez's first goal for Uruguay and to 2013, when Suarez set up Forlan's last.

‘I was the old one when he started so he was always coming to me and asking questions,’ Forlan tells AFP. ‘Now it's the other way round.’

They spoke last summer when Barcelona decided in the wake of the 8-2 mauling by Bayern Munich that Suarez would be let go, not sold but released, and not to a team far away but to Atletico Madrid.

‘All I know is it wasn't about his performances on the pitch,’ said Forlan.

‘I messaged him and said, 'listen you're not the first and you won't be the last. You have to keep being yourself. You don't have to prove anything to anyone so just keep doing it at Atletico Madrid.'

‘But when you get punished for something you didn't do, when you're still in great shape, playing well, of course your aim is going to be to show that you can still perform.’

Suarez has played like proving them wrong is everything, his 16 goals filling Atletico's goalscoring gap and propelling them to the top of La Liga.

On Sunday, they face Real Madrid, who are five points behind having played a game more, and who have scoring problems of their own, this weekend without the injured Karim Benzema, and more generally, since Cristiano Ronaldo left in 2018.

‘It was not just Cristiano Ronaldo leaving, one of the best players in the history of football. It is 50 goals leaving as well.

‘So if you sell a player like Ronaldo or Suarez, you have to replace them with two players and then there's risk because they have to adapt.

‘As soon as Cristiano left it was never going to be easy for Real Madrid and for Barcelona now it's the same.’

Atletico have been top for 14 consecutive weeks yet suspicion remains they could still cave, a pessimism lingering from a previous era, before players like Forlan redefined the club.

‘There was always something in the atmosphere,’ he says.

‘Everything could be going well but everyone was still expecting it to take a turn for the worse.

‘We wanted to change that mentality more than anything and when Diego Simeone came I think they erased it completely.

‘They have to forget that negativity. They've been winners now for the last seven or eight years.’

Or 11 to be precise, after Forlan's two goals in the 2010 Europa League final against Fulham won Atletico their first trophy in 14 years.

‘In that moment we grabbed the wheel and we pushed it in the other direction,’ he says. ‘It was the beginning of something.’

Forlan was a revelation, his two goals making it 28 for the season and making him Atletico's top scorer for the second year running. Two months later, he finished joint top scorer at the World Cup.

So what does he make of the game's new stars, Kylian Mbappe and Erling Haaland? ‘I think they will play in Spain one day,’ Forlan says. ‘Mbappe is so quick, Haaland is strong, great techinique, powerful.

‘People talk about Messi and Ronaldo but there's always someone coming through. It's like in tennis, once it was Federer and Nadal and people said it would never be as good again. Now Djokovic is close to being the best of all time.’

Forlan came through at Independiente in Argentina before joining Manchester United under Alex Ferguson in 2002.

‘I have great memories of my time there,’ he says.

‘People say I wasn't at my best but if you see the minutes I played and the goals I scored, it was the one of best records I had in my career.’

As a substitute, he spent a lot of time with Ole Gunnar Solskjaer, now United's coach, who has them sitting second in the Premier League.

‘We often sat next to each other on the bench, he would never stop talking,’ Forlan says.

‘He was always trying to understand the game, what the goalkeeper was doing, the weaknesses of the defenders. He was engaged in every single detail. He was a very intelligent guy.’

But it is the mention of Roy Keane that makes Forlan's face light up.

‘He was one of the best captains I had in my career,’ he says.

‘He would follow us into the changing room shouting at us after we lost even a little game in training. In the end I would be like 'Keano, OK stop. I need to shower. I need to go home'.

‘When I was older I did the same thing sometimes with younger players and in my head I was like, 'oh god, you're Roy now'. But you know when someone is shouting at you because they want you to be better. You argue but with respect.’