Clashes in Indian Kashmir over arrest of Umar Farooq 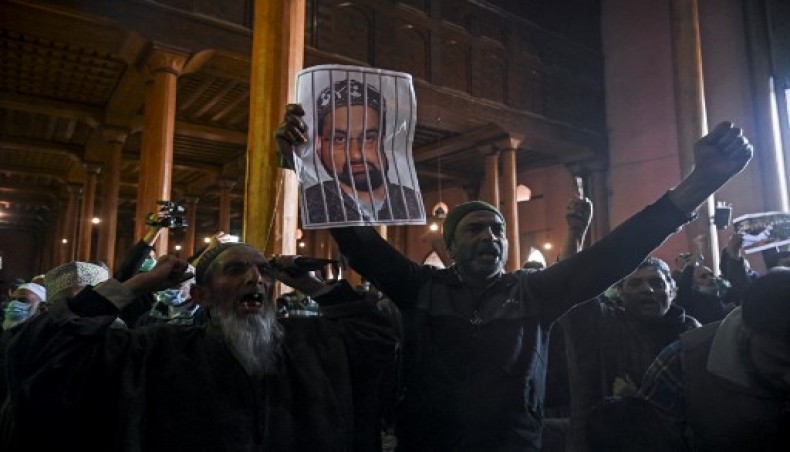 A Kashmiri protestors shout slogans and hold photographs of Mirwaiz Umar Farooq, Kashmir's Chief cleric who has been under house arrest for 20 months, during a protest demanding his release before Friday prayers inside the Jamia Masjid in downtown Srinagar on March 5, 2021.- AFP photo

Hundreds of stone-throwing protesters clashed with police in Indian-administered Kashmir Friday after authorities reversed a decision to release the region's chief Islamic cleric from house arrest, police and witnesses said.

Authorities have confined Mirwaiz Umar Farooq to his home since August 2019, when New Delhi imposed direct rule on the restive Muslim-majority region and enforced a heavy security lockdown.

On Thursday the cleric was informed that he was free to leave his home and address Friday prayers at the main mosque in Srinagar, but hours later the decision was reversed, the imam's political party said.

‘Late last night police officials visited the Mirwaiz's residence to convey to him that he continues to be under house arrest,’ the party said in a statement.

Angry at the decision, hundreds of the cleric's followers and worshippers poured out of the mosque after Friday prayers, throwing stones at police and shouting slogans such as ‘We want freedom’ and ‘release the Mirwaiz’, an AFP photographer on the scene said.

No injuries were reported from the clashes, which came a week into a ceasefire agreement between the Indian and Pakistan militaries along the Line of Control (LoC) frontier dividing the territory, which is claimed by both countries in full.

A ceasefire agreement on the de facto border has formally been in place since 2003 but since then both sides have regularly fired at each other, killing soldiers and civilians on both sides.