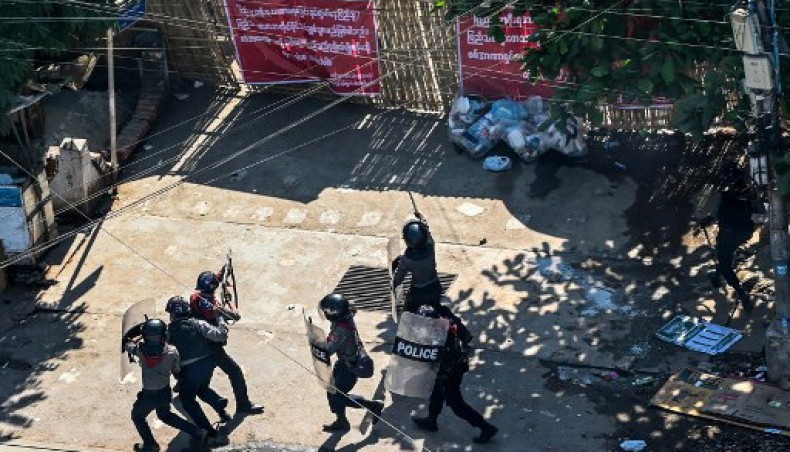 Police aim their weapons as they chase after protesters during a demonstration against the military coup in Yangon on March 4, 2021.- AFP photo

A number of people have begun escaping the turmoil in Myanmar into India, some of them police refusing to take part in the violent crackdown on protests against a military coup there, officials and reports said.

Myanmar's junta ousted civilian leader Aung San Suu Kyi on February 1, triggering a mass uprising that the military has responded to with increasingly lethal force. The UN said at least 38 people were killed on Wednesday.

Indian police said nine people crossed the 1,600-kilometre (1,000-mile) border into Mizoram state on the same day, three of them police refusing to take part in putting down protests.

The Hindu daily said at least 20 people have crossed over since Wednesday, and quoted locals as saying there were at least 50 in the districts of Champhai and Serchhip.

‘Their identities and reasons for fleeing Myanmar have been forwarded to the State's Home Department,’ local police chief Kumar Abhishek said.

The Hindustan Times quoted officials in Mizoram saying that locals have been told to report immediately any further Myanmar nationals crossing the frontier.

Champai deputy commissioner Maria CT Zuali told the paper that ‘those persons have to be caught and the local authorities alerted.’

‘We will try and find out if at all the lives of those entering India are threatened in Myanmar. We can decide on these people based on what the (central government) says,’ Zuali said.

‘If permission is not granted to take them in as refugees, they would be deported.’

Mizoram chief minister Zoramthanga said earlier that the state would welcome people fleeing the Myanmar military ‘with open arms, give them food and shelter.’

‘We would even approach the central government to grant us permission in the event of a refugees' influx,’ he said.