20 migrants dead after thrown into sea off Djibouti 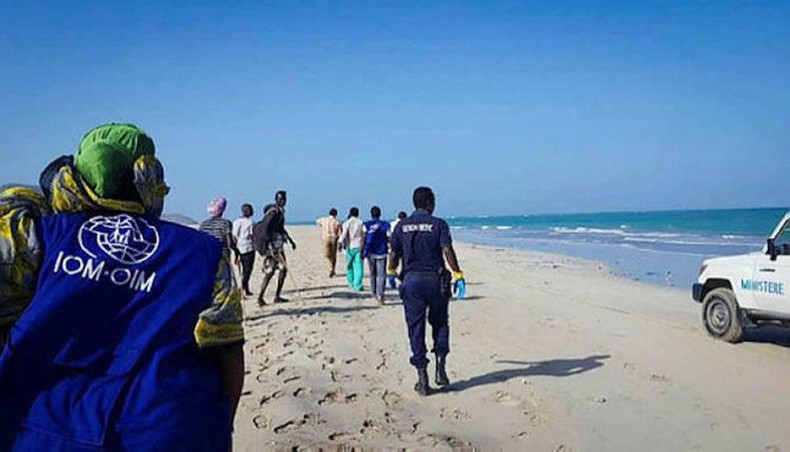 People search for survivors after two boats capsized off the coast of Godoria, Djibouti, on Jan 29, 2019. -- AFP file photo

At least 20 people drowned after smugglers threw dozens of migrants overboard during a crossing between Djibouti and Yemen, the International Organisation for Migration said on Thursday.

Survivors told the IOM that at least 200 migrants, including children, were packed aboard the vessel when it left Oulebi in Djibouti in the early hours of Wednesday for Yemen across the Gulf of Aden.

About thirty minutes into the voyage, the smugglers panicked about the number of people onboard and threw 80 into the sea before turning the vessel back toward land, said Yvonne Ndege, IOM regional spokesperson for the East and Horn of Africa.

‘Survivors believe at least 20 people have been killed. There are still some unaccounted for. Five bodies washed up onshore,’ Ndege told AFP.

The survivors are receiving medical treatment in the Djibouti port town of Obock, a major transit point for thousands of African migrants in the region trying to reach the Gulf.

There are fears the death toll could rise with survivors unable to locate family they say were aboard, Ndege said.

It is the third such incident in the Gulf of Aden in less than six months. Two similar incidents in October claimed the lives of at least 50 migrants, the IOM said.

‘Wednesday’s tragedy is further proof that criminals continue to exploit people desperate to improve their lives for profit regardless of the consequences,’ said IOM Djibouti chief of mission Stephanie Daviot.

‘Smugglers and human traffickers must be prosecuted for their crimes, and new migration pathways established to allow people to pursue work opportunities abroad in a safe, legal and dignified manner.’

The nationalities of those aboard the vessel are not yet known, with testimony still being collected from the survivors, the IOM said.

But every year thousands of migrants make perilous boat journeys from the Horn of Africa to war-torn Yemen, many with the aim of travelling overland to Gulf nations in search of work.

Restrictions on travel due to the coronavirus pandemic has sharply reduced the flow of migrants via this route. The IOM says roughly 138,000 people made the journey in 2019, compared with 37,500 in 2020.

It is believed thousands of migrants are stranded in Yemen, where a years-long conflict has claimed tens of thousands of lives and displaced millions in what the UN calls the world’s worst humanitarian crisis.

The strait which separates Djibouti from Yemen is unusual in that it sees migrants and refugees passing in both directions — boatloads of Yemenis fleeing to Africa to escape war, while others head in the opposite direction carrying African migrants to the Arabian Peninsula in search of better opportunities.