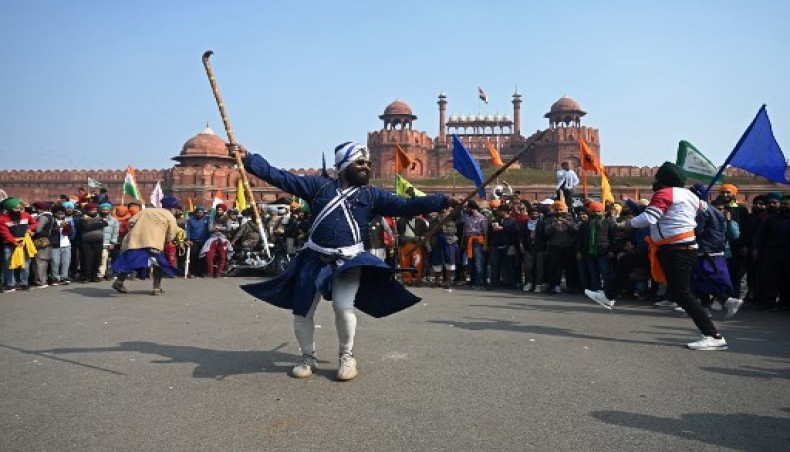 In this file photo taken on January 26, 2021, a Nihang, or Sikh warrior, performs in front of the Red Fort as farmers continue to protest against the central government's recent agricultural reforms in New Delhi. -- AFP photo

In an electric-blue robe, foot-high turban and wielding an antiquated sword and a walkie-talkie, Amar Singh patrols a maze of tents and tractors on a blocked highway leading into New Delhi.

Singh is among hundreds of armed men from the Sikh warrior order of Nihang, the self-appointed first line of defence in a showdown between farmers and Indian Prime Minister Narendra Modi's government.

Tens of thousands of farmers -- mostly from the Sikh-dominated Punjab state -- have camped at three protest sites on the capital's outskirts since November 26, when police blocked their entry into Delhi following clashes.

The protesters say they will not budge until the government repeals the three farm laws deregulating their sector, which they believe will destroy their livelihoods. The farmers' protests have been one of the biggest challenges Modi has faced since coming to power in 2014.

Singh, 32-year-old 'Major' in the 'army' of the Khalsa -- followers of Sikhism who have undergone a sacred ceremony -- oversees safety and security at the Singhu protest site.

‘This fight is for a just cause and anyone trying to harm the protesters will have to deal with us first,’ Singh, flanked by two spear-wielding men, told AFP.

‘We are here to defend our brothers and ready to die or kill. This fight is for peace, justice and dignity and we never compromise on these principles.’

Following a tractor rally-turned-rampage in Delhi on January 26, authorities built a wall with huge blocks of cement, steel and barbed wire on the border of the Singhu protest site.

On one side of this wall, are thousands of armed police and paramilitary forces, and on the other, dozens of barefoot Nihangs, armed to the teeth.

At the protest camp, Nihangs tend to horses they rode from their Punjab homes hundreds of miles away, practise the Sikh martial art of ‘Gatka’ and make a cannabis-laced sacramental drink.

Most Sikhs carry daggers as religious symbols and wear turbans, but Nihangs stand out with their robes and weaponry, including knives, swords and spears.

Nihangs have been revered by Sikhs for their piety and bravery since their order was founded in the 17th century by the last Sikh Guru to defend the religion, which began around 1500.

They played an important role in Punjab for over a century, including defeating Mughals and Afghan kings.

British colonialists dissolved the Sikh empire in the mid-19th century and the Nihangs were reduced to ceremonial roles.

In recent weeks, they have been in the spotlight, after pictures and videos emerged of them brandishing swords and spears at policemen at Delhi's historic Red Fort during the January confrontation.

In surreal scenes around the fort, Nihangs on horseback joined farmers on tractors and hoisted Sikh religious flags atop the rampart.

Days later, AFP witnessed a policeman wounded in a scuffle after he grabbed a Nihang's sword, as hundreds of people with alleged links to the government attacked farmers at the Singhu protest site.

Nihangs were criticised for openly brandishing and using their weapons, which they are allowed to carry under the constitution as part of religious tradition.

The warriors say they are simply fulfilling their obligations.

‘Whenever there is oppression, the army of Khalsa will stand firm against the oppressors,’ Nihang leader Raja Raj Singh told AFP.

‘Modi's government has turned against our farmers and labourers,’ he said. ‘If someone tries to attack us, we will defend ourselves.’