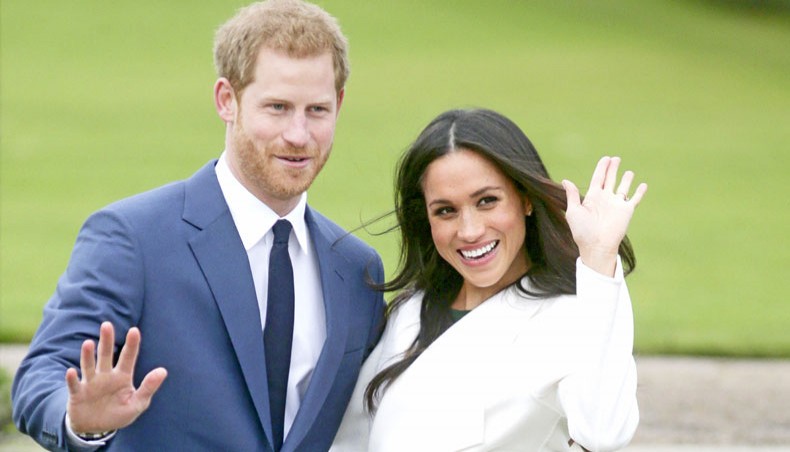 Meghan Markle says Buckingham Palace is ‘perpetuating falsehoods’ about her and her husband Prince Harry, according to part of an interview she has done with Oprah Winfrey.

The explosive claim is the latest salvo in an increasingly heated public relations battle between the British royal family and the US-based couple.

The clip, released Wednesday, came hours after Buckingham Palace said it was investigating claims Markle had bullied household staff in the months after her fairytale wedding to the prince.

‘I don’t know how they could expect that after all of this time we would still just be silent if there’s an active role that The Firm is playing in perpetuating falsehoods about us,’ Markle told Winfrey.

‘The Firm’ is a sometimes-derisive name for the British royal family.

Harry and Meghan announced last year they were stepping back from royal duties, in what became an increasingly acrimonious split from the family.

Their permanent removal from duties was confirmed earlier this year, with the royal household and the couple jockeying to control the narrative of the separation — and public sympathies.

The interview with Winfrey — one of US television’s most bankable names — is due to air in the US on Sunday, and in Britain on Monday.

In a clip released by US broadcaster CBS earlier this week Harry — who has frequently bemoaned press intrusion — said he was worried about ‘history repeating itself’, in an apparent reference to the death of his mother.

Diana died in a high speed car crash after being relentlessly pursued by photographers through Paris.

On Wednesday, Buckingham Palace said it was looking into newspaper reports of bullying by Markle against members of household staff.

‘We are clearly very concerned about allegations in The Times following claims made by former staff of The Duke and Duchess of Sussex... our HR team will look into the circumstances,’ it said.

The Times said the allegations dated back to October 2018, a few months after the couple’s spectacular wedding.

‘Members of staff involved at the time, including those who have left the Household, will be invited to participate to see if lessons can be learned,’ said the palace.

‘The Royal Household... does not and will not tolerate bullying or harassment in the workplace.’

‘The duchess is saddened by this latest attack on her character, particularly as someone who has been the target of bullying herself,’ her spokesman said.

‘She is determined to continue her work building compassion around the world and will keep striving to set an example for doing what is right.’

The couple said The Times was being used to ‘peddle a wholly false narrative’ ahead of their television interview.

Harry, who is Queen Elizabeth II’s grandson, married Markle in a glittering wedding at Windsor Castle in May 2018.

The former army officer’s marriage to the mixed race television actress was seen as breathing new life into the centuries-old British monarchy.

But relations soon soured and they moved to the United States, relinquishing their honorary titles and patronages.

Their eagerly-awaited interview with Winfrey is being billed as a lifting of the lid on life inside the royal family.

It comes as Harry’s grandfather, the queen’s husband Prince Philip, has been in hospital for several weeks being treated for an undisclosed infection, sparking fears for his health.

The 99-year-old Duke of Edinburgh was transferred to a specialist cardiac unit on Monday for tests on a pre-existing heart condition.

His daughter-in-law Camilla, the wife of Prince Charles, said on Wednesday that Philip was ‘slightly improving’, although he ‘hurts at moments’ due to the treatment.

Since relocating to the United States, Harry and Markle have embarked on several commercial ventures, including lucrative tie-ups with the streaming platforms Netflix and Spotify.

They have also taken legal action against a number of media publications, alleging invasion of privacy following what they described as intolerable media pressure in Britain.

Following a comprehensive victory in February against Associated Newspapers which published a private letter written by Markle to her father, she was awarded £4,50,000 ($6,27,000, 5,20,000 euros) as interim payment of legal costs on Tuesday.