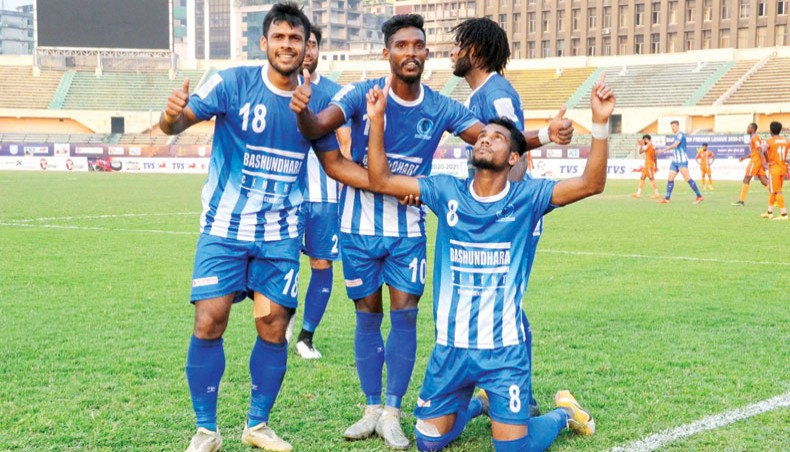 Sheikh Russel forward Abdullah (R) celebrates one of his two goals during their Bangladesh Premier League match against Police FC at the BNS on Thursday. — BFF photo

Abahani Limited finished their first-leg of the Bangladesh Premier League in second place after their 2-1 win against Uttar Baridhara at the Bangabandhu National Stadium on Thursday.

In the day’s first match at the same venue, Sheikh Russel Krira Chakra crushed Police Football Club by 5-0 goals to finish their first-leg campaign of the 13-team league.

Abahani’s Brazilian forward Francisco Wagsley Rodrigues scored once in the 26th minute from penalty before Baridhara conceded an own goal in the 54th minute.

Baridhara’s Egyptian defender Abdel Rahim pulled one goal back in 90th minute by placing the ball home from goalmouth.

Monake gave Russel the lead in the sixth minute before Rodrigues scored in the 28th minute.

Abdullah made it 4-0 scoring in the 36th and 69th minutes respectively before Asrorov extended the winning margin in the 84th minute.

With day’s results, Abahani moved up to second place from third but stayed nine points behind table toppers Bashundhara Kings, who secured 34 points with 11 wins against one draw after the first-league.

Abahani are two points ahead of unbeaten Sheikh Jamal Dhanmondi Club Limited, who have 23 points with one match to play in the first-leg.

Russel are in fourth place with 20 points from 12 games.