Patel, Ashwin spin England out for 205 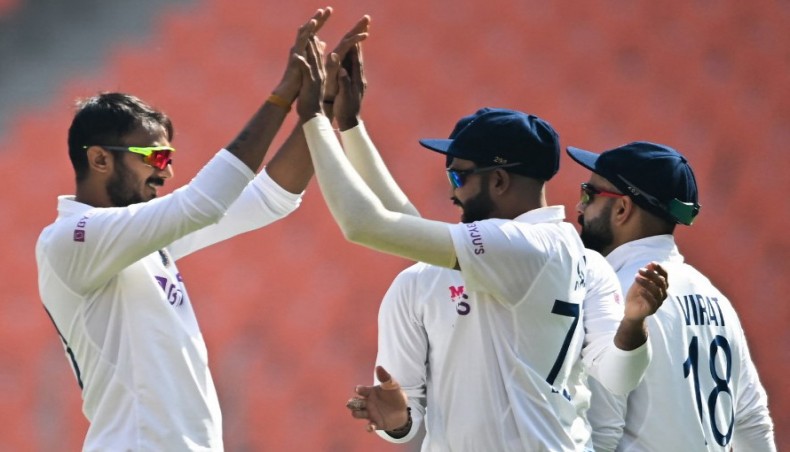 India's Axar Patel (L) celebrates the wicket of England's Zak Crawley with team-mates on the opening day of their fourth Test cricket at the Narendra Modi Stadium in Motera on Thursday. — AFP photo

Indian spinners Axar Patel and Ravichandran Ashwin took seven wickets between them as England's batting failed again on the first day of the fourth and final Test on Thursday.

England managed only 205 and India, leading the series 2-1, reached 24 for one after fast bowler James Anderson trapped Shubman Gill lbw for nought on the third ball of the innings.

Joe Root won the toss for the third time in the series and chose to bat at the world's biggest cricket venue in Ahmedabad, where India won the spin-dominated third Test inside two days.

‘We will look back on that be disappointed by some of the batting, we're more than capable of scoring more than 300 on a wicket like that,’ said Stokes.

‘It's not like the ball is turning or something,’ said Siraj.

‘It's a good batting wicket and we would like to bat for as many sessions as possible.’

The spin, introduced in the sixth over, was again devastating and Patel removed openers Dom Sibley for two and Zak Crawley for nine to set off his haul of four for the day.

Root went for five to an in-swinging Siraj delivery as his side slumped to 30-3 before Stokes put on key partnerships with Jonny Bairstow, who made 28, and Ollie Pope (29).

Bairstow was trapped lbw by a rising Siraj delivery and failed in a review that showed the ball would have clipped the top of middle stump.

Ashwin tested Pope with his off-spin after tea and the batsman was unlucky to get an inside edge off his back pad that went to short leg, and Gill took a simple catch.

Stokes reached his 24th Test fifty with a boundary off a reverse sweep, but the left-hander fell to a straight delivery from Sundar, bowled from around the wicket.

Patel, who has claimed 22 wickets in three Tests and took 11 in the previous match, got Dan Lawrence stumped four short of his fifty.

Earlier, spin was introduced in the sixth over and Patel soon removed openers Dom Sibley for two and Zak Crawley for nine.

Bairstow, who failed to score in either innings of the third Test, tried to steady the innings along with his captain.

But Siraj broke through after the first drinks interval to trap Root on the back foot with an in-swinging delivery.

But Siraj broke through after the first drinks interval to trap Root on the back foot with an in-swinging delivery.

Siraj and Stokes were involved in a verbal duel, joined by India captain Virat Kohli, until the umpires intervened. Stokes then hit back with three boundaries off the quick bowler.

Siraj said he was ‘abused’ by the England all-rounder and told Kohli about it, but the matter ended there.

Stokes brushed aside the incident, saying ‘it was two professionals showing that they care about the sport they love’.

England fast bowler Jofra Archer was left out of the game with a ‘right elbow issue’ that made him miss the second Test.