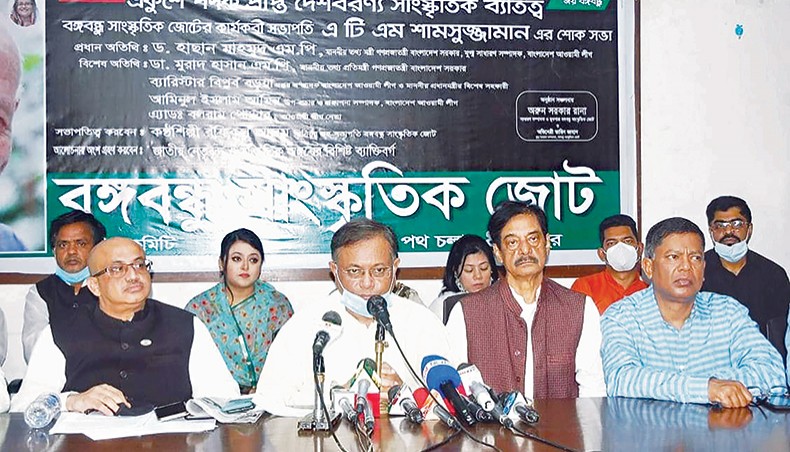 Bangabandhu Sangskritik Jote arranges a programme to commemorate the life and work of the late Ekushey Padak-winning actor ATM Shamsuzzaman at the National Press Club in Dhaka on Wednesday. — Sony Ramany

Ekushey Padak-winning actor ATM Shamsuzzaman was remembered at a programme held at the National Press Club in Dhaka on Wednesday.

Bangabandhu Sangskritik Jote arranged the programme to commemorate the life and work of ATM Shamsuzzaman, who passed away on February 20 at his residence in the capital’s Sutrapur area.

‘We could never imagine that ATM Shamsuzzaman would die suddenly. The news of his death came as a great shock to us. I have seen many films starring ATM Shamsuzzaman. He could easily fascinate viewers portraying both comical and negative roles. He forever followed the ideologies of Bangabandhu Sheikh Mujibur Rahman and participated in major socio-political movements. His death has left a huge void in the country’s entertainment industry. He will live on through his works,’ said Hasan Mahmud.

‘ATM Shamsuzzaman won hearts of viewers through his outstanding acting in both silver and small screen productions. He won acclaim portraying comical, negative, protagonist and supporting roles. I last met him in December 2020 at Bangabandhu Sheikh Mujib Medical University. He worked to uphold the spirit of the liberation war and followed Bangabandhu’s ideology. May his departed soul rest in peace,’ said Md Murad Hasan.

‘I had known him since 1973. He always encouraged artistes to think about the country alongside pursuing cultural practices. He believed that an artiste should work for the country, society and its people,’ said Rafiqul Alam.

‘I do not want to talk much about my father at today’s programme as everyone knows about him. If my father had ever wronged anyone, I urge them to forgive him,’ said Koyel Ahmed.

ATM Shamsuzzaman was born on September 10, 1941 at his maternal grandfather’s house at Daulatpur in Noakhali.

He also received the Ekushey Padak in 2015 for his outstanding contributions to the country’s film industry.