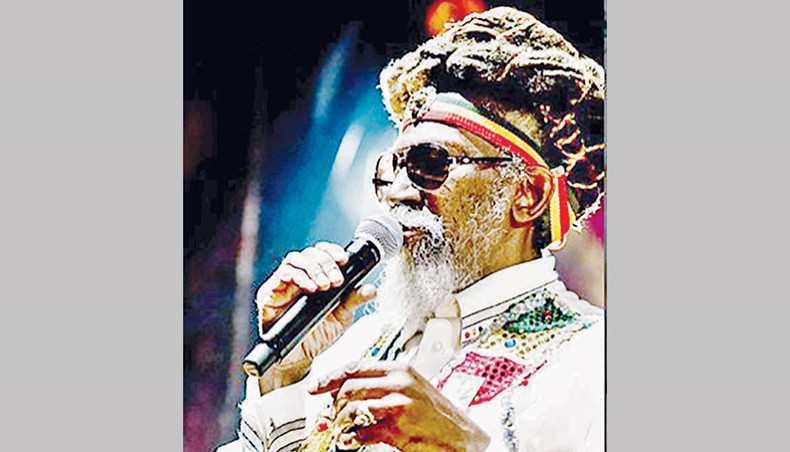 Reggae icon Bunny Wailer, who co-founded The Wailers with Bob Marley in the 1960s and helped make the catchy Jamaican beat a global phenomenon, died on Tuesday. He was 73.

No cause of death was given. but the Jamaican culture ministry said Wailer had been hospitalized in Kingston since December.

Wailer, who was born Neville Livingstone in the Nine Mile district, where Marley also came from, suffered a stroke in 2018 and another in July of last year.

He was the last surviving original member of the Wailers.

Wailer, who was a childhood friend of Marley, won three Grammys over the course of his career, and in 2017, he was awarded Jamaica’s Order of Merit, one of the country’s highest honors.

‘We remain grateful for the role that Bunny Wailer played in the development and popularity of Reggae music across the world,’ Culture Minister Olivia Grange said in a statement.

‘We remember with great pride how Bunny, Bob Marley and Peter Tosh took Reggae music to the four corners of the earth,’ Grange added.

Marley and Tosh acted as The Wailers’ primary singers and songwriters, but Wailer played a key role in providing harmonies and percussion to the trio’s songs, according to Rolling Stone magazine.

The band’s debut album on a major label, ‘Catch a Fire,’ released in 1973, helped propel the group to international fame.

At one point, that record was ranked 126th on Rolling Stone’s 500 Greatest Albums list.

The band’s biggest hits include ‘Simmer Down’ and ‘One Love.’

After leaving the band in 1974, Wailer went on to enjoy a prolific solo career as a writer, producer and singer of what is perhaps Jamaica’s best known export.

He drew much praise for his album ‘Blackheart Man,’ which included the song ‘Burning Down Sentence,’ which drew on Wailer’s experience doing a one-year prison sentence for marijuana possession.

‘The tracks that were done in ‘Blackheart Man’ were very symbolic and significant to this whole development of reggae music,’ Wailer told Reggaeville in 2017.

‘I really consider ‘Blackheart Man’ to be one of those albums that the universal reggae world should be focused on,’ Wailer said.

Fans in his hometown of Kingston mourned Wailer’s death Tuesday.

‘Bunny had a big impact on me, and I would love for some of the younger folks to listen to his message,’ 54-year-old clerk Devon Cole said.

‘My favorite song from him was ‘Blackheart Man.’‘

And Neil Parchment in nearby St. Catherine said Wailer ‘put (Jamaica) on the map.’

Wailer, a Rastafarian like Marley, won the Grammy for best Reggae album three times in the 1990s.

Tributes to Wailer poured in Tuesday.

‘In my view, Bunny Wailer was a more potent musician than even Bob Marley,’ said Karyl Walker, a veteran Jamaican entertainment journalist. ‘He played instruments, more than one, and he wrote very good songs.’

Walker noted that the wildly popular line dance song ‘Electric Boogie’ from 1983 was written by Wailer.

‘Now all the Wailers are dead and it is incumbent on the younger Jamaican entertainers to raise the bar and carry on this rich legacy,’ Walker told AFP.

‘We have lost an icon,’ added Herbie Harris, a keyboard player and vocalist who now leads The ATF band.

‘He will be missed,’ Douse said. ‘One of the best ways we can pay tribute to Bunny Wailer is to listen to the words of warning and encouragement that he gives to those who have been downpressed and dispossessed.’

Wailer’s death comes six months after that of another reggae giant, Toots Hibbert of Toots and the Maytals.

Hibbert, known for such hits as ‘Pressure Drop,’ died in Kingston in September at the age of 77.