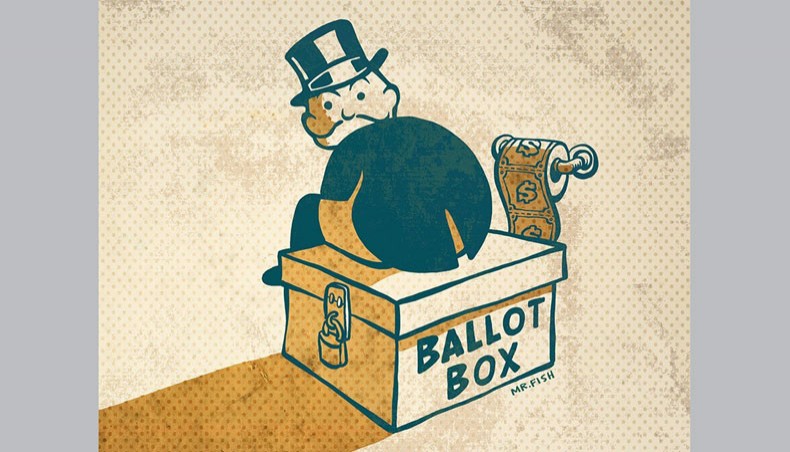 IT’S time for wealth redistribution. There, I said it. I know it’s the third rail of politics, but I’m not running for a damn thing, which makes me free to speak the truth. (Well, I am running for president of my neighbourhood elementary school’s PTA, but I’m pretty sure I’ll win easily since my campaign slogan is ‘Extend the school day to 20 hours because we don’t want to deal with those little monsters. You take ‘em!’... Well, I’ll win as long as they don’t find out I don’t have a child.)

Fifty trillion dollars has been redistributed from the poorest Americans to the top 1 per cent over the past several decades. That’s right, a new study shows the richest people in the world have stolen trillions from average Americans. To put this in easier to access terms — you know how mad you get when someone takes the last donut? Well, imagine that multiplied by 50 trillion. (Quick reminder: If you make $40,000 a year, it would take you 1.25 billion years to make $50 trillion.)

The new study reveals, ‘…that the cumulative tab for our four-decade-long experiment in radical inequality has grown to over $47 trillion from 1975 through 2018. At a recent pace of about $2.5 trillion a year, that number we estimate crossed the $50 trillion mark by early 2020.’

And to be clear, this money has been stolen from nearly every American. Had income distribution and buying power remained the same as it was from the end of World War II to 1975,  ‘the aggregate annual income of Americans earning below the 90th percentile would have been $2.5 trillion higher in the year 2018 alone. That is … enough to pay every single working American in the bottom nine deciles an additional $1,144 a month. Every month. Every single year.’

The richest people in America are pilfering over $1,100 from you personally and everyone you know every single month of every single year. Just imagine what each living soul in America could do with an extra $13,700 per year — how many people that would feed, how much less stressful their lives would be, how many fewer foreclosures there would be, and how many more people would get the healthcare they need. Yet every time the most modest tax increases are proposed on the richest Americans, or every time someone so much as mumbles about putting in a public jungle gym or putting in filters to take the metal chunks out of the water or fixing the holes in our bridges that are bigger than the ones in Maria Bartiromo’s head — every time someone brings up these common sense solutions, the elites of our society (who own the media outlets and the levers of the state and the law enforcement and the courts) start screaming from their wine-soaked ski resort orgy balconies, ‘That’s wealth redistribution! That’s class war!’

Meanwhile, most so-called ‘progressives’ tip-toe around this subject, saying things like, ‘Well, we just want to slightly increase the taxes on the giant swimming pools filled with money of the wealthiest people. It would only impact people with billions of dollars, which is only a few individuals. We’re sorry. We’re so sorry to ask for this, Mr Boss Man. Please forgive us.’

Enough of the pussy-footing. It’s time to demand true, full-on wealth redistribution. It’s time to say to the billionaires, ‘We’re taking your shit, and we’re giving it back to the society you stole it from. We’re taking your cars and your marble statues of your own ass and your boats that park inside your other boats and your emerald bathtubs filled with naked man servants and your inbred cross eyed ugly-ass dogs! ... But you can keep your children. We don’t want those sociopaths in training. But other than that, we’re taking your stuff because this level of inequality is what most rational economists call “fucking nuts”.’

I will however give one caveat to make this go smoother. We only take back everything over $10 million. It’s estimated that there are about 1.4 million American households who have over $10 million. So that means what I’m proposing would impact less than one-half of 1 per cent of Americans. The average American has never even met someone with over $10 million unless they shook Jim Carrey’s hand one time on a sidewalk in New York.

So we — the 99 per cent — would take everything over $10 million from the people who have over $10 million. And we would give it out with the bottom 50 per cent getting the vast majority of it. This means 99.5 per cent of Americans would benefit from this redistribution of wealth. So, before you argue against this idea — Remember: you benefit. You would receive money. Because I promise there is no one with over $10 million reading this column right now, unless one banker accidentally clicked on this because it was next to the Wall Street Journal in his Twitter feed.

Do you need more numbers to hammer home the point? The billionaires in this country have increased their wealth by over $1.3 Trillion, an increase of 44 per cent, just since the beginning of the pandemic.

One out of every three people in America has had trouble paying their bills during this pandemic.

Nearly 15 million people have lost their healthcare coverage just since the beginning of this pandemic.

And if you are the one person with over $10 million reading this, don’t give me that horse shit about, ‘I worked for that money. I earned that money.’ No, no, no, no, you did not earn over $10 million. I know you didn’t because that’s impossible. It’s madness. It’s Gary Busey inside Charlie Sheen inside Ted Nugent. Taking the laws of physics into account, there is no way you worked a thousand times harder than a janitor or a sanitation worker or a nurse or a busboy or a fluffer or a fluffer’s second assistant fluffer intern. It’s physically impossible that you worked a thousand times harder than every ‘essential worker.’ (Yes, fluffers are essential.)

What you did was merely take advantage of a system that is set up to exploit the vast majority of the society while most people don’t even realise what happened. That’s what you did because you’re a sociopath. Indeed, most of the Americans with over $10 million are sociopaths. They would kick a puppy down a flight of stairs into the teeth of a wool thresher if it meant they could make an extra $1,000. But I will acknowledge that not all of them are sociopaths. Some of them are relatively okay people working inside a breathtakingly corrupt system. So for the ones who are sociopaths, why should we feel bad for taking their wealth — over $10 million — and redistributing it? (They’re sociopaths after all. Lest we forget: they kick puppies.)

And then for the other ones, who are not sociopaths but still have over $10 million, they’re not going to suffer because at the end of the day, they still have ten million goddamn dollars! It’s not like they’d suddenly be scraping by, clothing their children with cardboard boxes painted to look like shirts and bow ties.

So the next time someone says to you, ‘You can’t raise the taxes on the top 1 per cent because that’s class war. It’s redistribution of wealth,’ don’t respond the way most squishy liberals respond — ‘Ummm, ahhh, errr, no, uhhhh, I’m sorry.’ Instead respond, ‘You’re damn right it is! I want redistribution of wealth. I want a nonviolent class war — because it has been done to the rest of us for the past 50 years at least. We have been exploited and abused, beaten down and defeated, kicked and slapped and scratched and drained and sucked dry and extracted and even burgled!’ (Oh man, do I hate being burgled.)

Now is our time to fight back against this terrible machine that has allowed this unbelievable level of exploitation. Screw this system that allows some people to have enough money to end world hunger (literally Jeff Bezos could end world hunger many times over) and yet never do it, while other individuals sleep on a bench hoping no one steals their one box of cereal in the night. To put my conclusion into more sophisticated academic language — Fuck that.

This is an abusive relationship, and it’s time to get out.

ScheerPost.com, February 25. Lee Camp is a writer and the host of the hit comedy news show Redacted Tonight. His latest book is Bullet Points and Punch Lines.