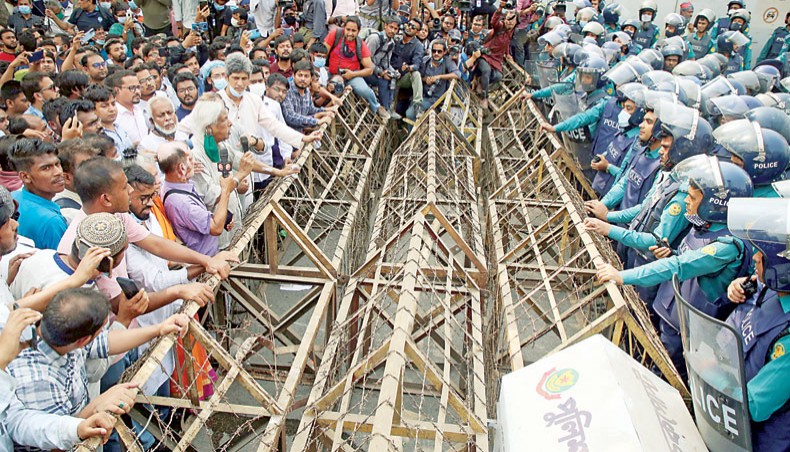 Police stop the citizens’ march towards the Prime Minister’s Office near the Hotel Intercontinental at the capital’s Shahbagh that begins from the National Press Club on Wednesday demanding justice for deaths in custody, including writer Mushtaq Ahmed’s death, and scrapping of the controversial Digital Security Act. — New Age photo

Police on Wednesday stopped the citizens’ march towards the Prime Minister’s Office near Hotel Intercontinental at the capital’s Shahbagh after they began the march from the city’s National Press Club demanding justice for deaths in custody, including writer Mushtaq Ahmed’s death, and scrapping of the controversial Digital Security Act.

They also demanded an immediate release of the arrested protesters after protests broke out across the country against Mushtaq’s death on February 25.

It was the sixth day of protest in the country after  the death of Mushtaq, who had been detained under the DSA in early May 2020 for his social media posts criticising the government.

He was denied bail six times during his nine-month-long detention at Kashimpur High Security Jail on February 25.

Different political, rights and student organisations as well as civil society members at home and abroad lauded their voice against the writer’s death in custody and called on the government to repeal the DSA and release all the detainees under the act.

During the protests, police arrested seven in Dhaka and one in Khulna.

The citizens as well as politicians began their scheduled rally in front of the National Press Club in the morning and then began their march towards the PMO at about 1:15pm.

The marchers’ plea to the police to allow a team of 20 representatives to go to the PMO to place their demands fell on deaf ears.

The march had to be ended there after a brief rally.

Addressing the rally as the chair, Zafrullah warned of tougher movement, including besieging the PMO if the DSA if the authorities do not repeal the draconian law by March 26.

Ganosamhati Andolan chief coordinator Zonayed Saki termed the DSA as a tool to oppress people and to consolidate the government’s illegal power.

He alleged that Mushtaq was picked up by the law enforcers who were influenced by a businessman.

‘Such an organised system is referred to as a mafia state’, he said and demanded that the people who were influencing the state mechanism and the judiciary must be brought to book.

Revolutionary Workers’ Party general secretary Saiful Huq said that the country lacked the rule of law and that is why convicted killers could manage to get out of jail following presidential clemency and a writer and entrepreneur could be killed in custody after being denied bail for six times.

The noted academic said that the citizens expressed fear over the misuse of the repressive DSA while it was being formulated and passed and the fear has become true.

Gono Forum president Dr Kamal Hossain, who sent a written speech to the rally, demanded scrapping of the repressive sections of the DSA immediately.

Nagarik Oikya convener Mahmudur Rahman Manna said that the government needed the suppressive DSA as they are illegal.

‘The Digital Security Act is needed as we have a repressive government,’ said acclaimed photographer and activist Shahidul Alam, who termed the government ‘shameless’.

Sushashoner Jonno Nagarik secretary Badiul Alam Majumder said that the DSA had made people’s basic right to freedom of speech and thinking as an offence, ensuring ‘criminalisation of our rights’.