2259 Rohingyas on their way to Bhashan Char 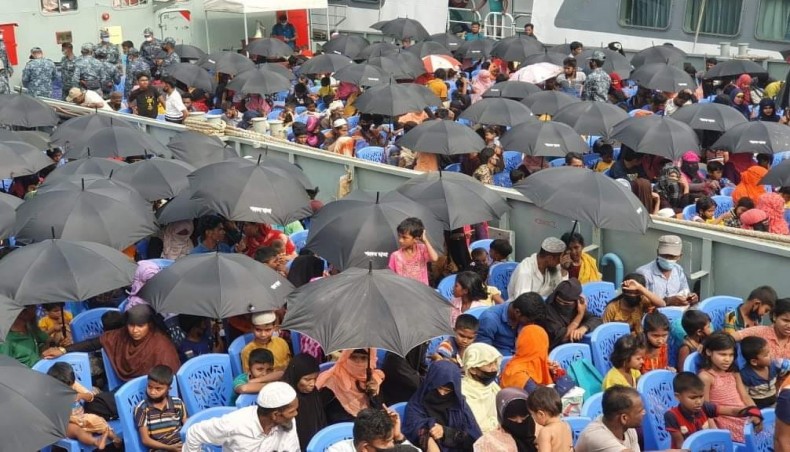 Rohingya people are on board in a Bangladesh Navy ship in Chattogram before heading for Bhasan Char on Wednesday.- New Age photo

A total of 2259 displaced Rohingya people of Myanmar are on their way to Bhashan Char island from Chattogram on Wednesday.

Officials concerned said that six ships of the Bangladesh Navy left Patenga Naval jetty carrying the Rohingyas in the morning.

Several dozens of buses with police guards carried the Rohingyas and their belongings to Chattogram from a temporary transit camp on the Ukhiya Degree College field in Cox’s Bazar earlier on Tuesday.

Md Shamsud Douza, additional refugees, relief and repatriation commissioner in Cox’s Bazar, told New Age that a total of 2259 Rohingyas are being shifted to Bhashan Char on Wednesday.

Another 500 refugees will leave camp in Ukhiya today (Wednesday) and reach to Bhashan Char tomorrow (Thursday) in the fifth phase of relocation, the officials said.

The authorities have so far transferred 10,717 Rohingyas to the Bhashan Char island since beginning the process in December.

A total of 8,60,000 Rohingyas, mostly women, children and aged people, entered Bangladesh fleeing unbridled murder, arson and rape during ‘security operations’ by the Myanmar military in Rakhine, what the United Nations denounced as ethnic cleansing and genocide, beginning on August 25, 2017.