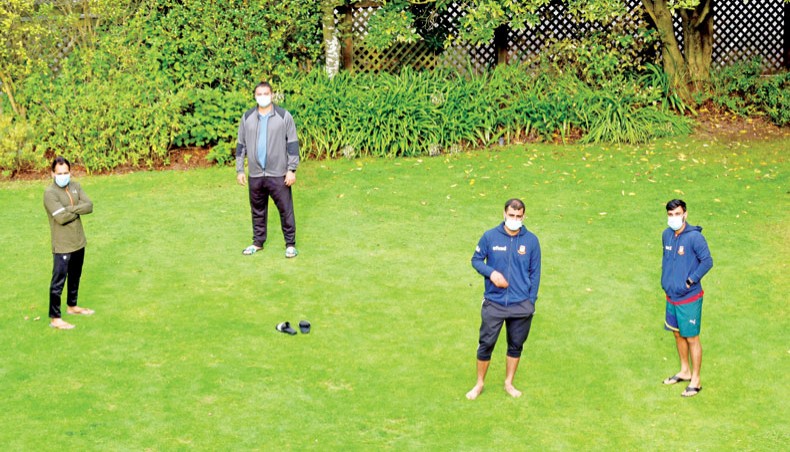 A group Bangladesh players are seen in front of their team hotel in Christchurch on Tuesday. — BCB photo

Wicketkeeper-batsman Nurul Hasan believes Bangladesh has a good chance of putting an end to their winless record against the Kiwis in New Zealand and feels that battle against the new ball will decide Bangladesh’s fate in the series.

The Tigers are currently in New Zealand to play three-one-day internationals and three-Twenty20s against the hosts, which is also their first overseas trip in the post-COVID-19 era.

Bangladesh, so far have played 26 matches against the Blackcaps in New Zealand across all formats but have failed to register a single win.

Nurul, who made both his one-day international and Test debut against the Blackcaps in New Zealand, believes the Bangladesh team can end their losing cycle this time, given they can tackle the opposition’s new ball attack.

‘Test, ODI or T20; whatever the format is, playing against them [New Zealand] at their turf will be challenging for us,’ Nurul told the media after completing a personal training session at the academy ground of the Sher-e-Bangla Stadium in Mirpur on Tuesday.

‘If we lose too many wickets early, then from that point fighting back is very difficult. If we keep wickets in hand in the later part, batsmen can play more shots. I think this time, the results will be better,’ he added.

Nurul, who is often dubbed as the best wicket-keeper in the country, was not considered for the New Zealand series but was part of the national team’s previous two tours to the country back in 2016

The 27-year-old, who has played two ODIs, three T20s and a Test in New Zealand, thinks that scoring runs will gradually get easier there if the batsmen can negotiate the first few overs.

The late-order batter also said that he enjoyed batting in New Zealand more than in Bangladesh.

‘I have made my ODI and Test debut in New Zealand. Batting in the old ball is really enjoyable there... Here in Bangladesh, we are often in two minds about the ball after it landed, but in New Zealand the ball is clearly visible,’ Nurul added.

Nurul has been out of the national side since 2018 but is regularly seen in understudy teams.

Nurul led Bangladesh in the Emerging Team Asia Cup in 2019 and also in the cricket event of the 2019 South Asian Games.

The wicketkeeper considered himself to be unlucky and is waiting for another opportunity at the highest level.

‘I don’t think everyone gets an equal opportunity. I have been dropped from the team a few times even after doing well because of the team combination. If I get another chance, I will try to give my 100 per cent.’