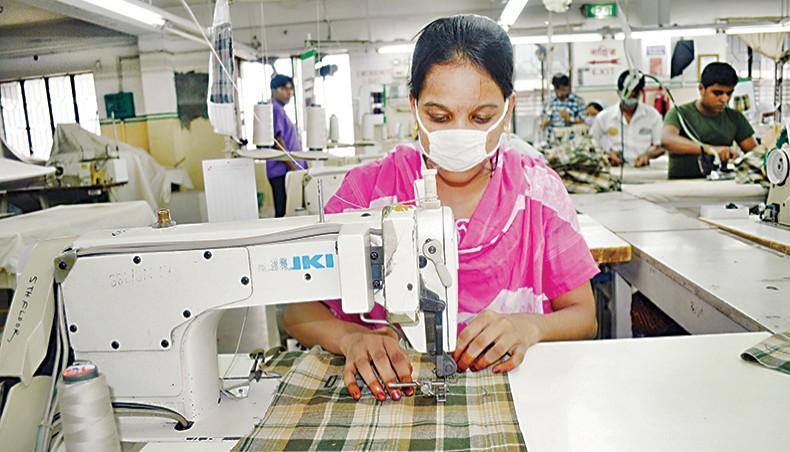 The proportion of female workers in the country’s readymade garment sector declined to 59 per cent in 2020 from 65 per cent in 2015, according to a recent survey conducted by the Asian Center for Development.

The survey identified that structural changes of RMG industries to knitwear from woven factories and adaption of new technology and machinery had squeezed the opportunity for the female workers.

The report also said that increase in wages in the RMG sector was attracting male workers with higher levels of education to seek jobs in the sector.

The study, however, showed that the number of both the male and female workers had increased in the RMG sector.

It also said that with changes in technology, the factories were looking for more skilled workers, which emerged as a great opportunity for the male workers.

In 2015, the ACD said in its survey that there were 65 per cent female workers in Bangladesh’s RMG sector.

‘Many believe that nearly 80 per cent of workers in the RMG sector are female. In this survey, we found that the male to female ratio of RMG workers is 35:65,’ said the ACD survey titled ‘Garment Workers in Bangladesh: Social Impact of the Garment Industry’.

In 2020, the non-government organisation completed its second study titled ‘Socio-economic Profile of Garment Workers of Bangladesh’ based on randomised surveys conducted on 1,119 workers and managers from 320 factories.

‘The number of female workers has been increasing every year in the sector and I do not think that the adoption of technology is squeezing the opportunity for the female workers,’ he said.

The study found that although many factories were closed in the aftermath of the Rana Plaza accident in 2013, the number of workers in the sector increased in 2020 from 2015 as the factories grew 70 per cent larger in size than those in 2014.

The study estimated that the total number of workers employed in the RMG sector was around 4.22 million in 2020.

According to the report, the yearly family income of the workers had increased by 7 per cent between 2014 and 2020 while the overall cost of living had risen by 7 per cent during the period.

The survey found that on the aggregate, the RMG sector workers sent Tk 1,011 crore in remittance per month to the rural economy.