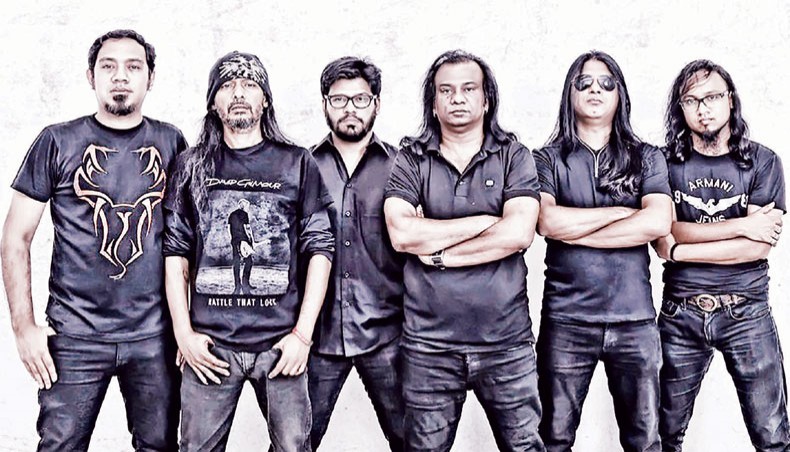 Sheikh Monirul Alam Tipu, third from right, along with members of Warfaze poses for a photo.

Drummer and co-founder of Warfaze, Sheikh Monirul Alam Tipu, said that his band is ready to perform in open-air concerts to entertain rock music lovers.

‘The government has already opened all public venues and even preparing to reopen all educational institutions. But, no one is thinking of organising open-air concerts and concert organisers like Young Bangla and others have even cancelled their regular concerts. I think it is time to resume open-air concerts,’ said Sheikh Monirul Alam Tipu while urging organisers to help musicians recover from the COVID-19-induced financial crisis.

The band performs in hundreds of open-air concerts every year at both home and abroad. Such concerts are important source of income for Warfaze as well as other bands of the country.

Warfaze had to cancel a good number of concerts from March 2020 till date after a ban was slapped on all open-air concerts in the country due to the COVID-19 outbreak.

‘We have completed our 36-year journey successfully and preparing for celebrating our 37th founding anniversary. We are now working on our ninth album which is scheduled to be released in December this year. We have already selected a number of lyrics for the album and working on music composition. Soon we will record the first song of the album,’ said Tipu, who also spoke about the band’s recent venture.

‘We have recorded a playback song for young director Sourav Kundu-directed film Girgiti. The lyric of the song, which will be released soon, is based on the story of the film. It was recorded on February 20,’ ended Tipu.