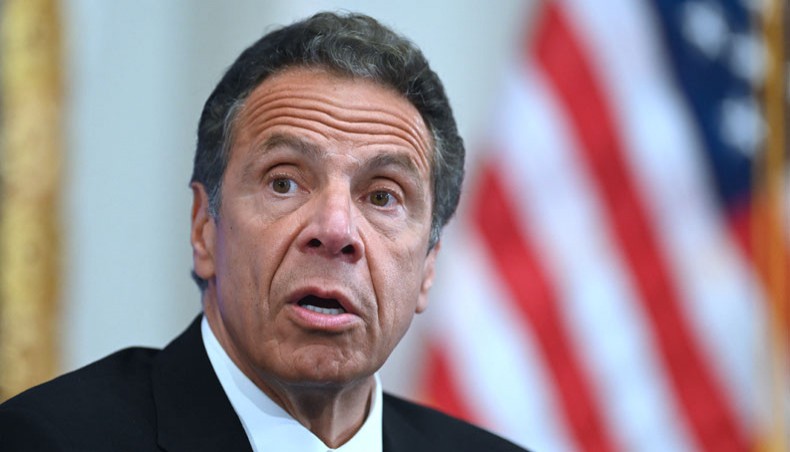 In this file photo governor of New York Andrew Cuomo speaks during a press conference at the New York stock Exchange on May 26, 2020 at Wall Street in New York City. — AFP photo

A third woman on Monday accused Andrew Cuomo of inappropriate behaviour, just hours after the New York governor formally referred himself for investigation over similar allegations from two former aides.

Cuomo has faced growing criticism, including from within his own Democratic Party, for suggesting the two ex-aides had ‘misinterpreted’ him.

Anna Ruch, 33, told The New York Times that she met Cuomo at a wedding in September 2019.

During the reception, he put his hand on her bare lower back — which she pushed away — and asked if he could kiss her.

‘I was so confused and shocked and embarrassed,’ Ruch told the Times. ‘I turned my head away and didn’t have words in that moment.’

Cuomo became a national star last spring with his straight-talking yet empathetic coronavirus briefings that contrasted sharply with then-president Donald Trump’s dismissive approach to the pandemic.

Earlier Monday, New York attorney general Letitia James said that Cuomo’s office had written to her granting her request to set up an independent probe into the accusations.

‘This is not a responsibility we take lightly as allegations of sexual harassment should always be taken seriously,’ James said in a statement.

The referral letter noted that the findings of the investigation will be ‘disclosed in a public report,’ James added.

Cuomo said on Sunday he was ‘truly sorry’ if his conduct had ever been ‘misinterpreted as an unwanted flirtation’ as he faced mounting pressure over the scandal.

He has denied ever inappropriately touching or propositioning anyone.

On Sunday, the 63-year-old bowed to pressure to grant an independent investigation.

He initially chose a former federal judge to lead the probe but high-profile figures in his own party said that was insufficiently transparent.

‘That’s not an apology. He seemed to be saying, ‘Oh, I was just kidding around.’ Sexual harassment is not funny. It’s serious,’ said de Blasio, a long-time rival of Cuomo’s.

‘He’s not taking any accountability. We have no reason to think he’s not going to repeat this behaviour again,’ Rita Pasarell told the Guardian in comments tweeted by the group.

Bennett described the governor’s response as ‘the actions of an individual who wields his power to avoid justice’ in a Monday night statement to the Times.

‘I stand with Anna Ruch,’ Bennett tweeted separately. ‘His inappropriate and aggressive behavior cannot be justified or normalised.’

Boylan also tweeted her support, writing that Ruch’s account made her ‘feel sick.’

According to the 25-year-old Bennett, Cuomo said in June that he was open to dating women in their 20s, and asked her if she thought age made a difference in romantic relationships, the Times reported.

While Cuomo never tried to touch her, ‘I understood that the governor wanted to sleep with me, and felt horribly uncomfortable and scared,’ she said.

On Wednesday, Boylan said in a blog that Cuomo had harassed her when she was working for his administration, from 2015 to 2018.

Boylan, 36, alleged that the governor had given her an unsolicited kiss on the lips, suggested that they play strip poker and went ‘out of his way to touch me on my lower back, arms and legs.’