US presses Saudis over Khashoggi killing 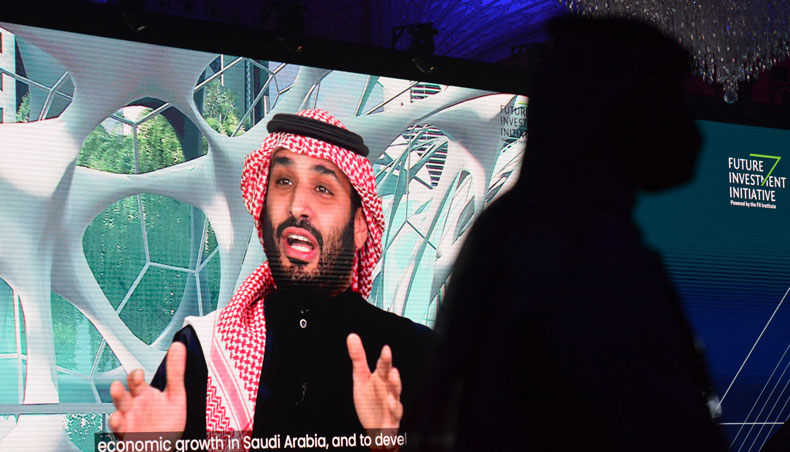 In this file photo taken on January 28, 2021 Saudi Crown Prince Mohammed bin Salman speaks during the Future Investment Initiative conference in a virtual session in the capital Riyadh. — AFP photo

The United States on Monday pressed Saudi Arabia to take further measures after the killing of journalist Jamal Khashoggi as Washington faced growing criticism that it did not directly target Crown Prince Mohammed bin Salman.

President Joe Biden on Friday released an intelligence report that found that Prince Mohammed approved the 2018 killing of Khashoggi, a US-based contributor to The Washington Post who was lured into the Saudi consulate in Istanbul where he was strangled to death and dismembered.

The report — classified under former president Donald Trump, a close ally of the Saudis — found that seven of the 15 members of the hit squad that flew to Istanbul came from the Rapid Intervention Force, which it said ‘exists to defend the crown prince’ and ‘answers only to him.’

‘We have urged Saudi Arabia to disband this group and then adopt institutional, systemic reforms and controls to ensure that anti-dissident activities and operations cease and cease completely,’ state department spokesman Ned Price told reporters.

‘We have made crystal clear — and will continue to do so — that the brutal killing of Jamal Khashoggi 28 months ago remains unacceptable conduct,’ Price said.

He also called on Saudi Arabia to act on other fronts including lifting a travel ban on Loujain al-Hathloul, an advocate for women’s right to drive in the ultra-conservative kingdom who was provisionally freed in January after nearly three years in jail.

The Biden administration imposed sanctions on the Rapid Intervention Force — meaning any US transactions with it will be a crime — and said it was banning entry into the United States of 76 Saudis under a new policy against foreign officials who harass dissidents.

Biden has sought to ‘recalibrate’ the decades-old Saudi alliance and has already said the United States will end support for offensive operations in the devastating Saudi war in Yemen.

But the administration stopped short of personally targeting the 35-year-old crown prince – the de facto leader as well as defence minister of the major oil provider.

Asked why no action was taken against the prince, also known by his initials MBS, White House press secretary Jen Psaki said that the United States does not typically sanction foreign leaders – despite frequent US action against senior officials of hostile nations.

But she hinted that Prince Mohammed was not permanently off the hook, saying: ‘Of course we reserve the right to take any action at the time and manner of our choosing.’

Khashoggi’s Turkish fiancee, Hatice Cengiz, said that the crown prince had lost legitimacy after the publication of the report.

‘It is essential that the crown prince, who ordered the brutal murder of a blameless and innocent person, should be punished without delay,’ Cengiz said in a statement posted on Twitter.

‘This will not only bring the justice we have been seeking for Jamal, but it could also prevent similar acts recurring in the future,’ she added.

Her comments were echoed in Geneva by Agnes Callamard, the UN’s special rapporteur on extrajudicial, summary and arbitrary executions, who called US inaction against Prince Mohammed ‘extremely worrisome.’

‘It is extremely, in my view, problematic if not dangerous to acknowledge someone’s culpability and then to tell that someone that we won’t do anything,’ Callamard told reporters, adding, ‘I am calling on the US government to act on its public findings and to sanction MBS for what he has done.’

Biden’s allies in Congress have also urged tougher action. Democratic senator Ron Wyden, who led the push to declassify the report called the prince ‘an amoral murderer responsible for a heinous crime.’

The Saudi government denounced the US report. It insists Khashoggi’s killing was a rogue operation that did not involve the crown prince.