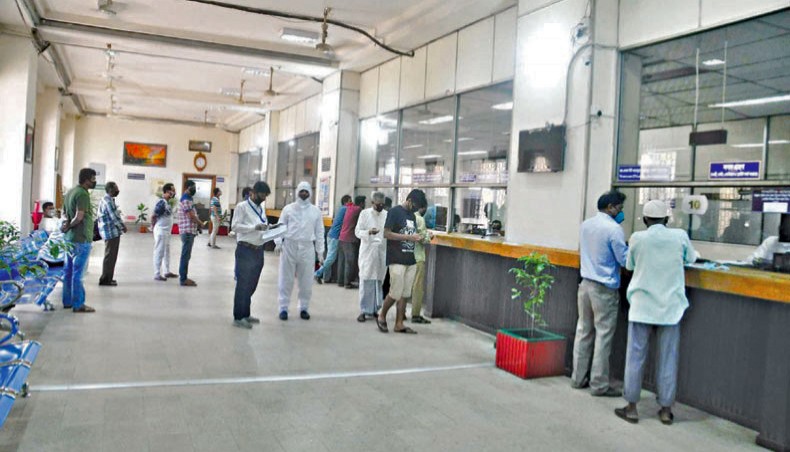 A file photo shows clients receiving services at a branch of a state-owned bank in the capital. Capital shortfalls in 10 banks swelled by 50.36 per cent or Tk 9,695.89 crore in the October-December period of the year 2020 as a number of state-owned banks had to keep higher provision against their defaulted loans.— New Age photo

Capital shortfalls in 10 banks swelled by 50.36 per cent or Tk 9,695.89 crore in the October-December period of the year 2020 as a number of state-owned banks had to keep higher provision against their defaulted loans.

A senior official of BB said that the overall shortfall in capital of the banks swelled due mainly to the implementation of core banking system in a number of state-owned banks.

Before the implementation of the CBS, the banks’ calculation on provision requirement was improper and that was why the requirement of provision was lower in the September-end quarter of 2020, he said.

As the banks had to keep higher provision against defaulted loans after the implementation of the core banking system, the shortfall in the banks’ capital widened accordingly, the BB official said.

He also said that the capital shortfall of the banks, especially of the SCBs, might increase in the upcoming quarters when they would extend the use of CBS as there would be no scope for hiding anything.

Another official of the central bank official said that the central bank had taken a stricter policy to ensure adequate provision against loans based on their classification after issuing moratorium facility against all the existing loans for the year 2020.

In an apprehension of a surge in defaulted loans after the loan instalment payment holiday in the year 2020, the central bank even asked the banks to keep 1 per cent additional provision against all unclassified loans along with the loans shown in the special mention account thus enhancing the volume of required provisioning.

As per the Guidelines on Risk Based Capital Adequacy, the failure of any bank to maintain the minimum capital within the stipulated period may result in punitive measures including imposition of penalty by the central bank as per the section 13(7) of the Bank Company Act 1991 (revised up to 2013).

Under existing rules, banks are supposed to maintain 10 per cent capital against their risk weighted assets.

Although the 10 banks suffered capital shortfalls, the rest 49 banks managed to maintain adequate capitals against their risk weighted assets.

The BB data showed that the overall capital to risk (weighted) assets ratio of the banks was 11.64 per cent at the end of December 2020.

The data also showed that the risk weighted assets in the banking sector stood at Tk 11,32,647.72 crore at the end of December.

Against the risk weighted assets, the overall capital requirement of the banks was Tk 1,15,904.05 crore at the end of December whereas the sector maintained Tk 1,31,834.11 crore in capital, leaving an overall Tk 15,930.06 crore in capital surplus in the banking sector.

In October-December, National Bank of Pakistan became compliant with the central bank’s requirement.