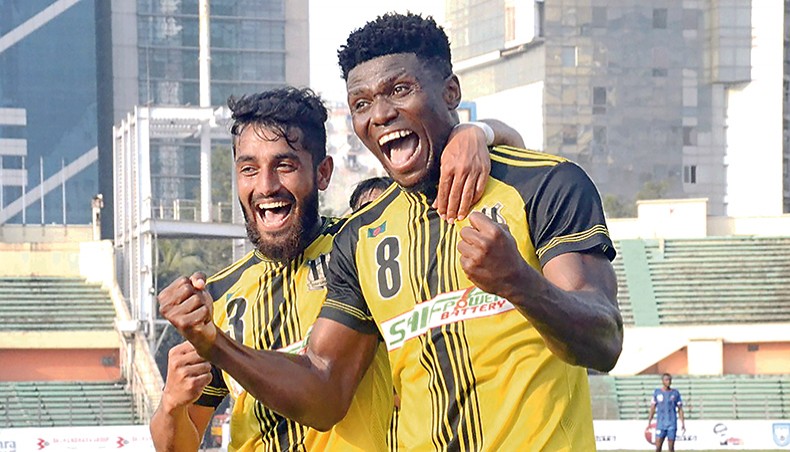 Saif Sporting Club’s Nigerian midfielder John Okoli (R) celebrates after scoring one of his two goals against Police Football Club during their Bangladesh Premier League match at the BNS on Monday. — BFF photo

Saif Sporting Club and Brothers Union registered big wins in the Bangladesh Premier League when they bested their respective rivals at the Bangabandhu National Stadium on Monday.

Forward Jamir Uddin scored the only goal for Police.

Kenneth gave Saif the lead in the 44th minute before Okoli doubled the margin by scoring in the stoppage time of the first half.

Jamir made it 1-2 for Police in the 61st minute by scoring with a header following a free kick by Kyrgyzstani midfielder Murolimzhon Akhmedov.

Okoli made it 3-1 in the 86th minute, scoring from a quick counter attack while Sazzad put the final nail in Police’s coffin scoring in the stoppage time of the match.

In the second match, Brothers midfielder Faisal Mahmood scored a brace. He scored his first one in the stoppage time of the first half and while the second one came in the 71st minute.

Nigerian forward Samson Iliasu, Congolese forward Siyo Zunapio and midfielder Mezbah Uddin netted the other three goals in the 55th, 61st and in the stoppage time of the match respectively for Brothers.

Arambagh’s Gambian midfielder Ibrahim Moro and forward Nihat Jaman Ucchash scored once each in the 10th and 57th minutes respectively.

With the day’s results, Saif and Police have earned 19 and 12 points respectively from 11 games.

With the win, Saif moved up to fourth place from seventh while Police remained on their previous eighth place.