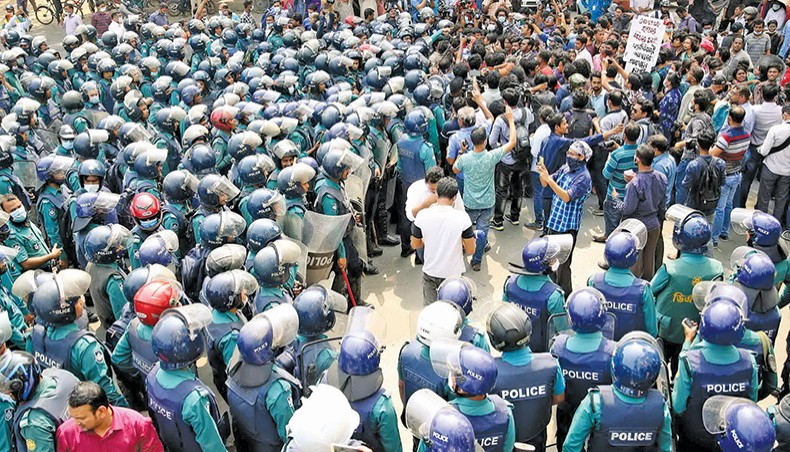 Police stop a procession of Progressive Students’ Alliance in front of the Bidyut Bhaban near the Secretariat on Monday in Dhaka as they march towards the home ministry demanding justice for writer Mushtaq Ahmed’s death. — Sourav Laker

Protests continued on Monday for the fourth consecutive day demanding justice for the death of writer Mushtaq Ahmed in jail, scrapping the controversial Digital Security Act, an immediate release of the detained protesters in Dhaka and Khulna and those arrested under the Digital Security Act, including cartoonist Ahmed Kabir Kishore.

Various organisations staged street protests in Dhaka and elsewhere in the country while the United Nations High Commissioner for Human Rights and PEN Bangladesh in separate statements backed the demands.

Mushtaq, detained under the DSA in early May 2020 for his social media posts criticising the government and denied bail six times during his nine-month-long detention, died in the high-security Kashimpur jail on February 25 evening.

Different political, rights and student organisations have been protesting against the death of the writer and demanding repeal of the DSA since Friday.

Cartoonist Kishore, also a co-accused in the case, has been in jail also since his arrest in early May 2020.

UN High Commissioner for Human Rights Michelle Bachelet in a news release on Monday urged the Bangladesh government to review the Digital Security Act and to release those detained under the act for exercising their rights to the freedoms of expression and opinion.

She also urged the authorities to ensure a proper investigation into the death of Mushtaq in custody in a prompt, transparent and independent manner.

PEN Bangladesh, a chapter of PEN International consisting of Bangladeshi writers, poets, publishers, editors, translators, journalists and academics, in a statement on Monday condemned Mushtaq’s death in jail and demanded the immediate formation of an independent and multilateral inquiry committee to find out the cause of his death and identify those responsible.

In Dhaka, Progressive Students’ Alliance on Monday demonstrated near the Bangladesh Secretariat in the capital for more than half an hour as the police prevented their procession from besieging the home ministry housed in the Secretariat to press for justice for the death of writer Mushtaq Ahmed in jail and other demands.

At around Monday noon, several hundred leaders and activists of Progressive Students Alliance carrying banners, placards and posters reading the demands began their scheduled march towards the home ministry from the Raju Memorial Sculpture on the Dhaka University campus chanting slogans for their demands and slamming the government.

Police personnel first tried to stop the protesters’ procession with a barbed wire fence near the Shikkha Bhaban but the agitators broke through the obstruction and continued the march.

At about 12:30pm, the protesters reached in front of the Bidyut Bhaban, adjacent to the Secretariat, where the police stopped them again and an argument and scuffle ensued between protesters and police officers present there.

As the police prevented them from moving farther, the protesters stopped and staged a rally there, which continued for about 40 minutes.

Speakers at the rally questioned as to why the writers, intellectuals and activists that criticised the government were being arrested under the repressive act and denied bail one after another while murder convicts were being pardoned and murder-case accused were getting bail immediately after surrendering before courts.

They also asked whether the accused under the DSA and student leaders were more dangerous than the murderers.

They demanded an immediate release of the seven student leaders in Dhaka and a jute mill movement leader in Khulna, arrested for protesting against Mushtaq’s death.

‘Actually, the government fears protests by students and intellectuals who have the courage to speak against misdeeds of the government,’ said Bangladesh Chhatra Union general secretary Dipak Kumar Shil.

In Khulna, pressing for the same demands, Sramik-Krishak-Chhatra-Janata Oikya formed a human chain in front of the Khulna press club on Sir Iqbal Road and brought out a procession that ended at the Khulna court premises.