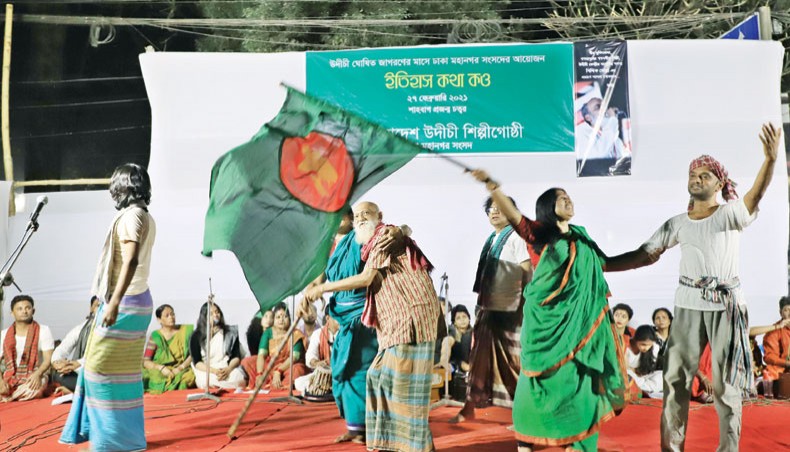 Itihas Katha Kao, which has been written and directed by Udichi vice-president Mahmud Selim, comprises songs, dance recitals, recitation and others.

Itihas Katha Kao depicts the history of the Bengali people and gives the audience a glimpse into the sufferings of the Bengalis in the then British India and East Pakistan. The play also portrays the assassination of country’s founding president Sheikh Mujibur Rahman and his family members on August 15, 1975.

Young artistes from Udichi Dhaka Mahanagar Sangsad performed in the production. It was staged as part of the on-going two-month-long cultural event, titled Jagaraner Mas, organised by Bangladesh Udichi Shilpigoshthi.

Artistes of Bangladesh Udichi Shilpigoshthi from across the country have been performing in the event, which began on February 1 and would continue till March 30.

‘Itihas Katha Kao is one of our most popular dance drama productions. It gives the audience a glimpse into the history of the Bengali people and our country. It comprises songs, dance recitals and recitation. We have staged the play hundreds of times across the country. We first staged the production in 1976 at Ispahani Degree College in Keraniganj,’ Kongkan Nag, assistant general secretary of Udichi Dhaka Mahanagar Sangsad, told New Age.