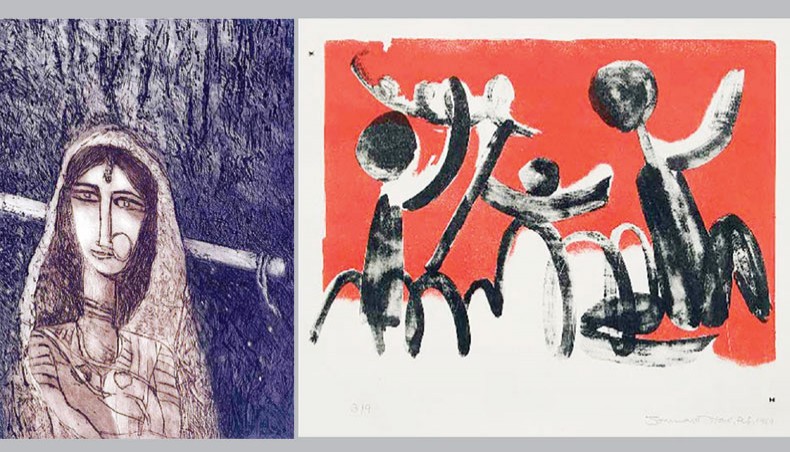 A group art exhibition, dedicated to the birth centenary of Padma Bhushan-winning Indian artist Somnath Hore, who was born on April 13, 1921 in Chattogram, began on Sunday at Galleri Kaya in the capital’s Uttara.

The 16-day exhibition titled, Masters and Prodigies, is featuring 67 works by 34 contemporary and [email protected] artists of India.

The exhibition also opens the premises of Galleri Kaya to visitors for the first time since the emergence of COVID-19 in March, 2020 in Bangladesh.

To mention a few works, MF Husain’s serigraphic print created on black paper titled ‘Kite Series’ shows some kites that are part of torn clothes of women. The torn parts together assume a human figure in the middle while the bottom part carries an image of a female figure in red accompanied by some geometrical shapes in green.

KG Subramanyan’s untitled work shows a figure of a woman holding a flower in her hand. On the left are some geometrical figures while the bottom portion shows a couple and a flower pot.

Amitabha Banerjee’s untitled etching shows a woman in sari and ornaments used in this region. The background of the work is filled with some lines in black and grey.

Another work of the artist, a serigraph on paper titled ‘Waiting’, shows a profile of a woman who has been waiting for someone she desires.

Suhas Roy’s untitled etching work shows a shattered human face and the edges of the face is covered in dark colours.

Aditya Basak’s untitled etching work shows a chicken walking along with two chicks highlighting the role a mother in a family.

The exhibition will remain open till March 16 for visitors from 11:00am to 7:30pm every day.