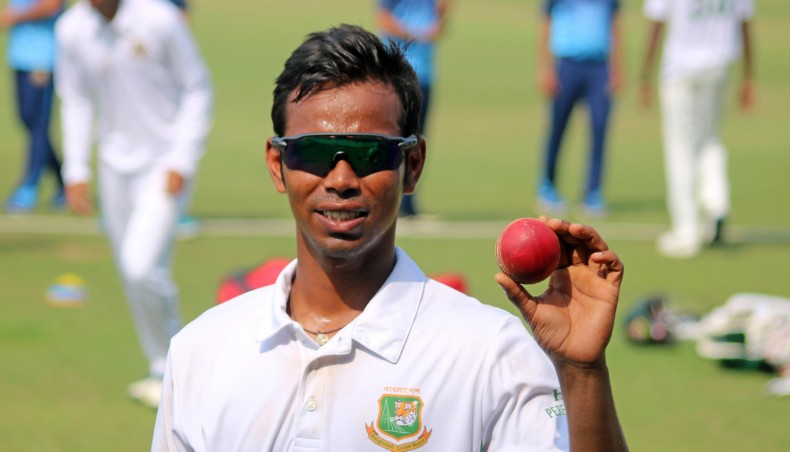 Bangladesh emerging team spinner Tanvir Islam shows the ball after defeating Ireland Wolves on the third day of their four-day match at the Zahur Ahmed Chowdhury Stadium in Chattogram on Sunday.— BCB photo

Left-arm spinner Tanvir Islam ransacked Ireland Wolves with an eight-wicket haul in the second innings to bowl them out for and ensure an innings 23-run win for Bangladesh emerging team on the penultimate day of their lone four-day match in Chattogram on Sunday.

Tanvir took 8-51 in the second innings and finished with match figures of 13-106, his first 10-wicket haul in a first-class cricket, to hand the hosts a comfortable win at the Zahur Ahmed Chowdhury Stadium.

Tanvir claimed five out of the remaining six wickets on the third day after the Irish team resumed their second innings on 35-4, trailing by another 127 runs.

The 24-year old spinner had taken three wickets on the previous day but went wicketless in the morning session on Sunday.

Overnight pair of Harry Tector and Curtis Campher, who were both unbeaten on two at stumps on the second day, saw off the morning session and added 55 runs.

But their resistance ended in the second over of the post-lunch session when skipper Saif Hasan dismissed Campher for 22.

After the day’s first breakthrough, Tanvir got into the act, picking up five wickets in one spell to wrap up the Ireland innings.

Tector, who is also the captain of his side, was the only Irish player to score a half century in the match, making 55, before getting trapped leg before wicket by Tanvir.

Bangladesh in their first and only innings of the match posted 313 thanks to Yasir Ali’s fluent 92 off 115 balls, with the help of eight fours and five towering sixes.

Skipper Saif also chipped in with 49 while Under-19 World Cup winners Mahmudul Hasan and Tanzid Hasan made 42 and 41 runs respectively.

Both sides will now move onto white-ball cricket, and begin their five-match one-day series on March 5 at the same venue.

The second and third match of the series will take place on March 7 and 9 in Chattogram before the teams return to the capital to play the final two one-dayers.

The tour will end with a two Twenty20 matches which will take place in Dhaka on March 17 and 18 respectively.