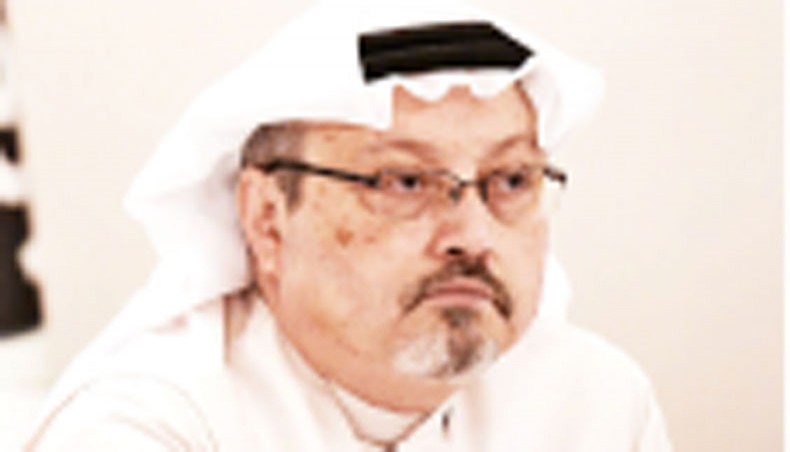 ‘The government of the kingdom of Saudi Arabia completely rejects the negative, false and unacceptable assessment in the report pertaining to the kingdom’s leadership, and notes that the report contained

inaccurate information and conclusions,’ the Saudi foreign ministry said in a statement.

In the partially redacted report released Friday by president Joe Biden’s administration, US intelligence concluded that the prince ‘approved an operation in Istanbul, Turkey to capture or kill’ Khashoggi.

Saudi Arabia has previously described the murder as a rogue operation

and has vehemently denied the crown prince was involved.

‘It is truly unfortunate that this report, with its unjustified and inaccurate conclusions, is issued while the kingdom had clearly denounced this heinous crime, and the kingdom’s leadership took the necessary steps to ensure that such a tragedy never takes place again,’ the foreign ministry said.

‘The kingdom rejects any measure that infringes upon its leadership, sovereignty, and the independence of its judicial system,’ the ministry added.

Khashoggi, a staunch critic of Prince Mohammed, was lured to the Saudi consulate in Istanbul in October 2018 and murdered by a Saudi squad.

The US report said that given Prince Mohammed’s influence, it was ‘highly unlikely’ that the murder could have taken place without his green light.

Despite its anger over the report, Saudi Arabia also stressed that it was keen to maintain the relationship.

‘The partnership between Saudi Arabia and the United States of America is a robust and enduring partnership,’ the foreign ministry said.

‘We look forward to maintaining the enduring foundations that have shaped the framework of the resilient strategic partnership between the kingdom and the United States.’

The United States will ban entry of foreigners who threaten dissidents and will immediately restrict 76 Saudis in honour of the slain Jamal Khashoggi, secretary of state Antony Blinken said.

After president Joe Biden declassified a report that pinned blame on Saudi crown prince Mohammed bin Salman over Khashoggi’s 2018 killing in Istanbul, Blinken vowed the administration will ‘push back against governments that reach beyond their borders to threaten and attack journalists and perceived dissidents for exercising their fundamental freedoms.’

‘We have made absolutely clear that extraterritorial threats and assaults by Saudi Arabia against activists, dissidents and journalists must end. They will not be tolerated by the United States,’ Blinken said in a statement.

Under the new ‘Khashoggi ban,’ the United States will restrict any individuals who have engaged in ‘serious, extraterritorial counter-dissident activities’ that includes harassment of journalists or their families, Blinken said.

In a first implementation, Blinken said the United States will ban the entry of 76 Saudis who have been engaged in threatening dissidents overseas including in the Khashoggi case.