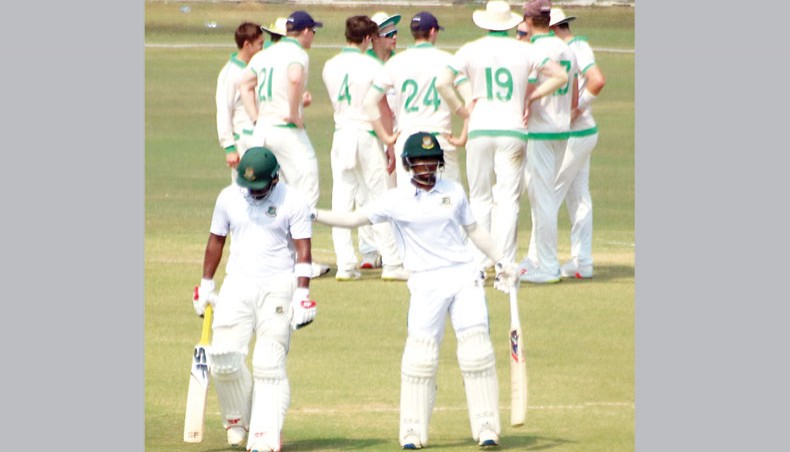 Bangladesh emerging team batsman Yasir Ali (L) leaves the ground after he was dismissed for 92 on the second day of their four-day match against Ireland Wolves in Chattogram on Saturday. — BCB photo

Yasir Ali’s 92-run knock followed by three late strikes from left-arm spinner Tanvir Islam placed Bangladesh emerging team in a commanding position against Ireland Wolves as they lead the visitors by 127 runs at the end of the second day of their four-day match in Chattogram on Saturday.

Bangladesh emerging team posted 313 runs, in reply of the Irish team’s first innings score of 151, thanks to Yasir’s innings and 40-plus knocks from skipper Saif Hasan, Mahmudul Hasan and Tanzid Hasan Tamim (41).

Tanvir, who took 5-55 in the first innings, again bamboozled the Ireland Wolves batters as he snapped up three wickets in space of eight deliveries to leave them stuttering on 35-4 at stumps on day two.

Earlier, the hosts resumed their first innings on 81-1, with overnight batters Saif and Mahmudul unbeaten on 22 and 18.

The pair added 52 runs on the second day and both were inching towards a half-century but ended up getting dismissed in consecutive overs.

Saif was the first to go as he gave a catch to wicketkeeper Lorcan Tucker when he was only one run away from his 13th first-class half century.

Mahmudul, who is making his debut in first-class cricket in this match, followed his senior partner to the dressing room in the next over as he was given leg before wicket off Gareth Delany after scoring 42 off 77 balls with the help of six fours.

Yasir, who is yet to make his debut in international cricket despite getting picked in the Bangladesh squad on multiple occasions, dominated the Irish attack from the start, smashing eight fours and five sixes to cruise into the nineties.

But the right-hander fell eight runs short of what would have been his 22nd first-class century as he got trapped LBW by Jonathan Garth.

Under-19 World Cup winners Towhid Hridoy (36), Shahadat Hossain (20) and Akbar Ali (19) also made small contributions to give their team a 162-run lead in the first innings.

Ireland Wolves batted only 20 overs in dying half of the day at the Zahur Ahmed Chowdhury Stadium and ended up losing four wickets in that period.

Tanvir then claimed the wickets of Jeremy Lawlor (eight), Garth (0) and Stephen Doheny (20).

Skipper Harry Tector and Curtis Campher fended off the last few overs and both remained unbeaten on two.