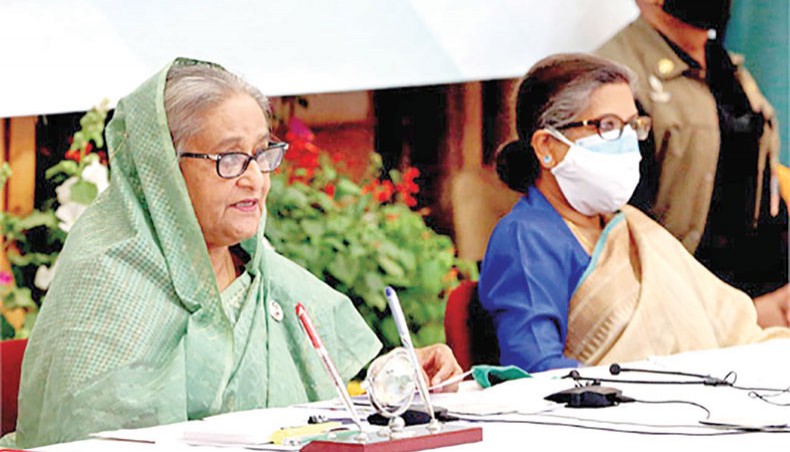 Prime minister Sheikh Hasina, along with her sister Sheikh Rehana, virtually addresses a press conference on Saturday from her Ganabhaban residence over Bangladesh’s advancement to the developing country status. — Focus Bangla photo

Describing the country’s graduation to a developing one as historic and a matter of pride, prime minister Sheikh Hasina gave the full credit to the countrymen, saying that the milestone has been achieved due to united efforts of all.

‘The people of the country have done it and we have only created the scope giving policy supports,’ she added.

She was addressing a press conference on Saturday joining virtually from her Ganabhaban residence in the capital marking the United Nation’s final recommendation regarding Bangladesh’s graduation to a developing country from the LDC one.

Her younger sister Sheikh Rehana and transport and bridges minister Obaidul Quader were also present at the Ganabhaban end.

Sheikh Hasina said it had resulted from her government’s tireless planning, toiling and efforts in the last 12 years.

‘Today’s achievement to a developing country from the least development one is the outcome of our 12 years’ tireless planning, hard-working and efforts,’ she said.

She said that she felt proud being part of the achievement and thanked the countrymen at home and abroad and the development partners.

The prime minister dedicated the achievement to the new generation and youths who move forward Bangladesh towards more prosperity and development.

She said Bangladesh had secured its position as a dignified and confident country in the world stage through to the graduation.

Describing the achievement as a special step to make Bangladesh a developed country, Sheikh Hasina stressed the need for making Bangladesh’s position firm and sustainable in the outer world.

‘Let us all irrespective of parties and opinions make a commitment to turn Bangladesh into a ‘Golden Bangladesh’ at the advent of the August moment of the Birth Centenary of Father of the Nation Bangabandhu Sheikh Mujibur Rahman as dreamt by Bangabandhu,’ she said.

To make the development sustainable, she said that the government has formulated the eight five-year plan and included different strategies in it to ensure sustainable development.

The prime minister said the Bengali is a nation of bravery and it had achieved its independence in only nine months, adding, ‘Bangladesh will soon establish as a developed, prosperous and dignified country in the world if the pace of development continues.’

The economy will gain pace further if the mega projects such as Padma Bridge, metrorail, elevated expressway, tunnel under the Karnaphuli river, Rooppur Nuclear Power Plant and Moheshkhali-Matarbari coordinated development projects, 100 economic zones and over two dozens high-tech parks and IT village are implemented.

Sheikh Hasina said that Bangladesh achieved the status of a developing country after successfully fulfilling all the three criteria such as per capita income, human resources and economical and environmental vulnerability assessed by the United Nations in its this year’s triennial meeting.

The UN in its first triennial meeting three years back first recognised that Bangladesh has fulfilled all the three criteria in 2018, she continued.

PM’s press secretary Ihsanul Karim moderated the function while cabinet members and the country’s senior journalists got connected to the event from the Prime Minister’s Office at Tejgaon in Dhaka.

Newsmen approached the premier with different questions after she delivered a written statement in her first press conference since the coronavirus outbreak.

Asked for comments about impending changes after attaining the LDC graduation challenges, Sheikh Hasina said her government took all required steps to uphold the newly achieved status under a well-devised plan.

‘We will have to uphold the status of a developing nation and will have to make it permanent and sustainable … We have plans and preparations,’ she said.

The premier simultaneously urged the countrymen to perform their own responsibilities with sincerity and honesty for sustainability of the nation’s enhanced status so Bangladesh could move ahead with head high and self-esteem, depending on its own foot.

She said the government mechanisms worked well in combating the coronavirus pandemic though many feared it could lead the country towards disarray while Bangladesh in reality moved up to this stage largely due to sincere and combined efforts of all offices.

The prime minister said as the nationwide first round vaccination campaign was underway, her office issued directives for procurement of another three crore doses of the COVID-19 inoculates and in case of unavailability of the jabs from outside Bangladesh itself would produce the vaccines.

‘I have already asked our pharmaceutical companies which can do it (produce vaccines) to get prepared while we are seeing whether the vaccines are brought to the country …’ she said.

Asked when she herself would receive the jab, Sheikh Hasina said she will certainly take vaccine but before that she wanted to bring a certain number of people under the inoculation coverage.

Asked for her reaction to a recent Al-Jazeera report, the premier said she had nothing to say to this end and preferred the people of the country to judge its merit and authenticity alongside the motive behind the documentary.

But she hinted it was outcome of outrage of Bangabandhu’s assassins, people who wanted to kill her and 1971 war criminals and their relatives as they were out to tarnish the country’s image and obstruct its development as they were exposed to justice.

Replying to another question regarding debates over the Digital Security Act, Sheikh Hasina said her government was obligated to ensure the digital security since it waged the massive Digital Bangladesh campaign reaching the ICT facilities at grassroots.