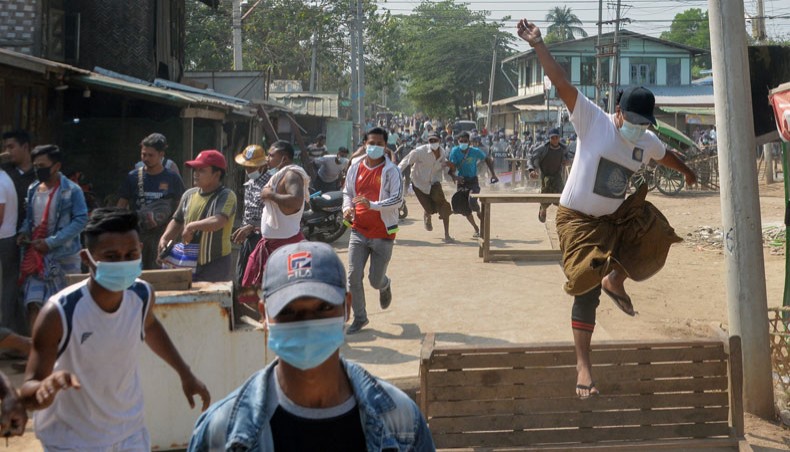 Protesters run away from police advancing towards them during a crackdown on demonstrations against the military coup in Naypyidaw on February 26, 2021. -- AFP photo

Myanmar’s ambassador to the United Nations made an impassioned plea on Friday for the international community to take the ‘strongest possible action’ to end the junta’s rule in the country.

Kyaw Moe Tun’s voice cracked with emotion as he spoke out against the military regime that ousted the nation’s elected civilian government in on coup on February 1.

It is extremely rare for a representative to break with the rulers of the country they represent during an address at the UN General Assembly.

The ambassador even flashed the three-finger salute that has been used by pro-democracy protesters during street demonstrations against the junta, after concluding his speech with a message in Burmese.

‘We need the strongest possible action from the international community to immediately end the military coup, to stop oppressing the innocent people, to return the state power to the people, and to restore the democracy,’ he pleaded.

Kyaw Moe Tun, his voice trembling, called on all member states to issue public statements strongly condemning the coup during the special meeting on Myanmar.

He appealed for countries not to recognize the military regime or cooperate with it and asked them to demand that the junta respects last year’s democratic elections.

‘We will continue to fight for a government, which is, of the people by the people, for the people,’ he said.

The diplomat’s address was met with warm applause in the chamber, with diplomats quick to congratulate him.

The last time an ambassador broke ranks with their country’s ruler was in 2011 when the Libyan representative denounced then leader dictator Moamer Kadhafi.

Earlier, the UN envoy to Myanmar Christine Schraner Burgener said she ‘strongly condemns’ recent steps by the junta including ‘unacceptable’ use of lethal force, and called for the international community to press for a return to democracy.

‘There is no justification for the military’s actions, and we must continue to call for the reversal of this impermissible situation, exhausting all collective and bilateral channels to restore Myanmar’s path on democratic reform,’ she told the general assembly via video link.

The diplomat said she been blocked from visiting Myanmar by the military regime.

‘It seems they want to continue making large-scale arrests. This is cruel and inhumane,’ she said.

‘If there is any escalation in terms of military brutality — and sadly as we have seen this before in Myanmar — against people exercising their basic rights, let us act swiftly and collectively,’ Burgener added.

US ambassador Linda Thomas-Greenfield, making her first address in the chamber, said president Joe Biden’s regime stands ‘in solidarity’ with the Myanmar protesters.

‘We will show the military that their actions have consequences. Violence against those exercising their human rights and fundamental freedoms is unacceptable,’ she said.

China’s ambassador to the UN, Zhang Jun, repeated his country’s stance that the current events in Myanmar are ‘internal affairs.’

‘The voice and measures taken by the international community should help the parties in Myanmar bridge their differences and solve problems, and avoid intensifying tensions and further complicating the situation,’ he said.