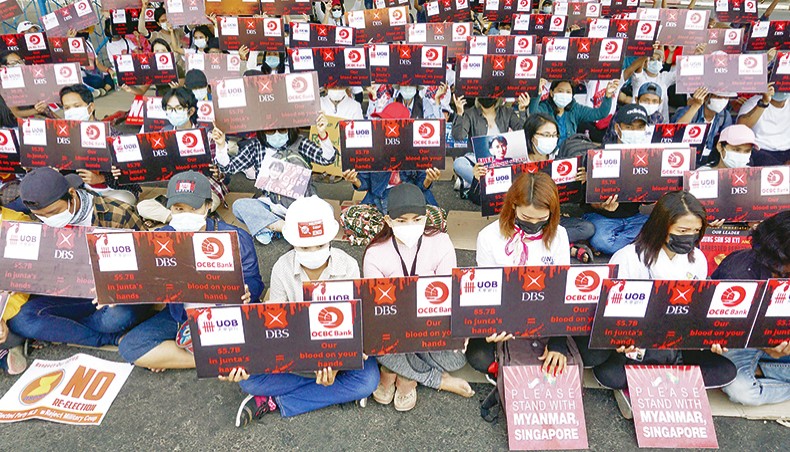 Protesters hold signs during a demonstration against the military coup in Yangon on Friday. — AFP photo

Riot police in Myanmar on Friday dispersed hundreds of anti-coup protesters who have rallied daily in the country’s largest city against a junta that toppled civilian leader Aung San Suu Kyi.

The nation has seen an outpouring of anger and defiance from hundreds of thousands of protesters who have gathered to call for Suu Kyi’s release and a return to democracy.

In some cities, security forces have steadily increased their use of force, but in commercial hub Yangon, authorities have exercised restraint, largely relying on barricades and troop presence to prevent gatherings around city landmarks and embassies.

Protesters have bypassed restrictions by moving fluidly through the city, organising around central junctions Hledan and Myaynigone.

But on Friday riot police advanced on the demonstrators — mostly sitting and chanting pro-democracy slogans — and warned them to disperse.

Six protesters and a Japanese journalist were arrested after officers cleared a busy traffic artery.

Yuki Kitazumi, a freelance reporter, ‘was beaten on the head by baton but he was wearing a helmet’, his assistant Linn Nyan Htun said on Facebook.

A police officer denied that Kitazumi was beaten, and later said he had been released.

Wearing hard hats, protesters shouted the regular anti-junta refrain: ‘Failure to the dictatorship is our cause, our cause!’

And uptown off Hledan junction, demonstrators sprinted away in alarm as police warned: ‘If people do not disperse, we will have to disperse by force!’

One frightened protester ran into a nearby house to hide, telling AFP that police had deployed stun grenades.

‘We had to run,’ Nyo Hlaing said, adding that some protesters retaliated by shooting projectiles using slingshots.

As officers searched apartments, residents around Hledan protested by banging pots and pans — a common act of defiance against the military regime.

Back on the main traffic junction, officers allowed buses and cars to go through.

Some passengers flashed a three-finger salute — a symbol of resistance borrowed from neighbouring Thailand’s pro-democracy movement.

There were also protests in Mandalay on Friday, where thousands of demonstrators gathered in front of the city’s biggest shopping mall, dressed mostly in white with face masks and hats in red — the colour of Suu Kyi’s National League for Democracy party.

As the protesters spread out, police used slingshots to disperse them, according to an AFP reporter. Five people were injured, including one seriously, said Thet Htay, a doctor.

Tensions in Yangon are particularly high, with many rattled after a pro-junta rally was allowed to move through the city’s downtown area Thursday.

The military supporters carried slingshots, knives and pipes, which they used to attack people living near the site of their protest, according to reporters and residents.

On Thursday night soldiers and police gathered in a Yangon township to break up a small rally against a junta-appointed municipal administrator, alarming residents who scattered back to their homes to avoid arrests after the 8:00pm curfew.

State-run media reported Friday that authorities had deployed stun grenades and fired live rounds in the air to disperse the protesters in Tamwe township.

Twenty-three people will ‘face action according to the law’, it said.