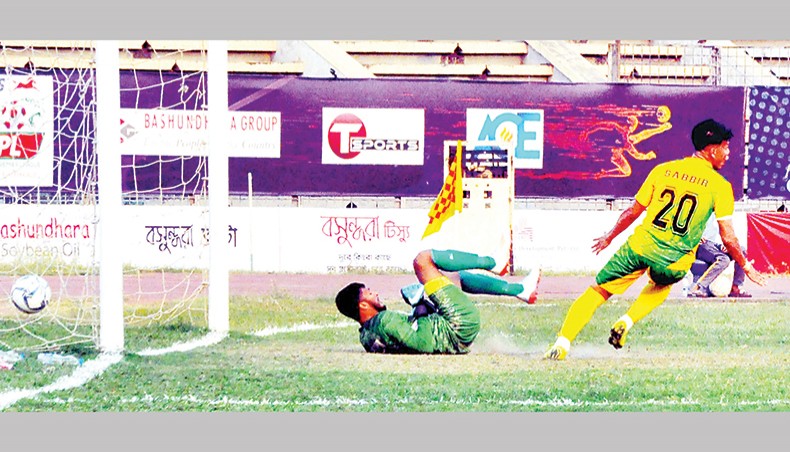 Mohammedan Sporting Club Limited and Chittagong Abahani played out a 1-1 draw in their Bangladesh Premier League match at the Bangabandhu National Stadium on Friday.

In the day’s other match, Muktijoddha Sangsad Krira Chakra and Rahmatganj Muslim Friends Society also played a 1-1 draw at the same venue.

Mohammedan’s midfielder Rakib Hossain and Ctg Abahani midfielder Shahid Rakib Khan Evan scored once for their respective side in either half of the match.

Ctg Abahani Brazilian forward Nixon Brizolara’s shot was punched away by Mohammedan keeper Hossain Suzan, but the ball rebounded to Rakib who fired the ball into the net in the 15th minute.

In the ninth minute of the second half Mohammedan levelled the margin, when Shahid coolly sent the ball home with his left foot with Malian forward Souleymane Diabate providing the assist.

In the first match, defender Mahbub Hossain Fahim scored for Muktijoddha in the very first minute of the contest.

Midfielder Arafat Hossain equalised for Rahmatganj in the 56th minute.

Muktijoddha’s lead came in the 24th second of the game as Fahim tapped the ball home from inside the box from a through pass from Japanese midfielder and captain Yusuke Kato.

Arafat scored the equliser with a right-footed drive off a back pass from Egyptian defender Alaaeldin Nasr.

After the day’s results, Mohammedan and Ctg Abahani stood on fifth and sixth respectively with identical 16 points with the former going ahead by virtue of scoring more goals.