The ‘morality’ of AI weaponry 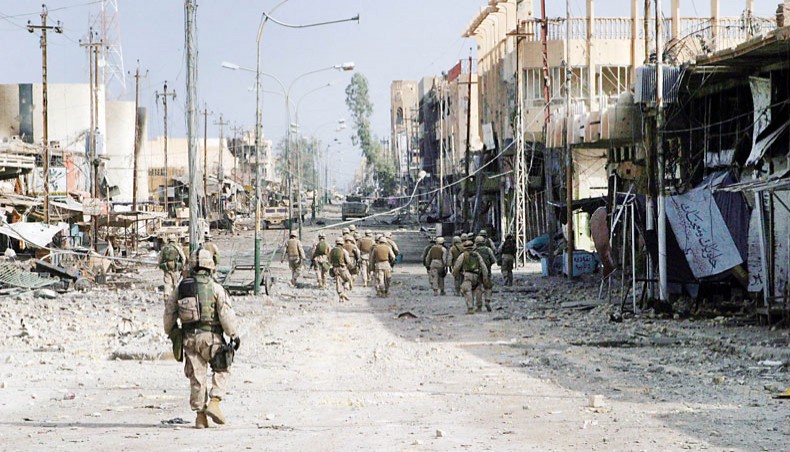 The panel, led by Google’s former chief executive, Eric Schmidt, has prepared a report that calls for the expenditure of $20–30 billion to advance the programme.

Its vice-chairman, Robert Work, a former deputy secretary of defence, said autonomous weapons are expected to make fewer mistakes than humans do in battle, leading to reduced casualties. ‘It is a moral imperative to at least pursue this hypothesis,’ he said.

The draft report recommends that Washington ‘adopt AI to change the way we defend America, deter adversaries, use intelligence to make sense of the world, and fight and win wars.’ (Work is on the board of directors for Raytheon, and board of advisers for Govini, a big data and analytics firm committed to transforming the business of government through data science.)

Categorical moral imperatives from on high are something I missed out on while growing up. The cost of a misspent youth. How I envied our aging Scottish neighbour who regaled me with tales from his childhood of attending Calvinist services in Dunfermline. There, in church every Sunday, he was instilled with the righteous obligation to improve himself by a steely preacher of stern rectitude. I, by contrast to those youthful uplifting spiritual experiences, whiled away the Lord’s Day by lounging in front of the TV watching ballgames.

So, I am thankful for the high-minded admonitions issued by Silicon Valley’s best and brightest that I have a ‘moral imperative’ to support spending some tens of billions on artificial intelligence directed weapons that kill only those who deserve it, ie, Washington’s chosen ‘elect.’ Now I have the moral cause that I have been missing all these years — its absence being the source of my irresolute vacillation on matters of violent death and destruction.

Admittedly, some unfortunate habits of thought tenaciously resist being wholly uprooted. The proclivity to test faith-based military doctrines against reality is one of them. Awkward questions keep popping up to impede my progress along the road of ethical truth and redemption. Therefore, I am earnestly beseeching your assistance in laying those doubts to rest. Here they are, in summarised format.

THE March 2003 bombing of hundreds of sites across Iraq was intended to cow the Iraqi leadership into surrender as well as to clear the way for the invasion. Large buildings, installations and complexes were destroyed with thousands of casualties. Question: how would AI weapons systems have affected this strategy? Is there a more precise version of ‘shock and awe’ which has the same psychological and military impact?

IN THE course of the war, American forces levelled most of Fallujah — twice, driving a hundred thousand or so into the desert. Question: given that the enemy were dispersed throughout the city, and camouflaged, what would have been the capability of AI systems to identify appropriate targets through algorithm-driven searches in data banks for retina matches, facial recognition, etc? How might the civilians be alerted by the guys at Fort Meade and at central command that there was no match for them and that they safely could stay home watching CNN videos of the assault on their TVs?

IN THE campaign against the Islamic State, we razed most of Mosul and Raqqa. The marines alone fired 20,000-plus artillery shells into Mosul, a densely populated city of well over a million. The air force flew 30,000-plus combat missions. The French air force, the Iraqi air force, the National Army, and the Shi’a militia also fired on the city.

With all this firepower, it took several weeks to clear Mosul of ISIS fighters. Civilian casualties and refugees have been too numerous to count. Question: how would AI have enabled us to achieve the same objectives in sanitary fashion in the light of ISIS tactics of evasion that were far more complex than those encountered in Falluja?

(The other alternative for taking an urban area is fighting house-to-house with only limited artillery and air support. That, of course, means higher casualties for combat troops. Razing the city in effect substitutes civilian casualties for military casualties among the attacking force — at a ratio of 10:1 or 20:1?)

HERE the United States provided the bulk of the firepower to topple and kill the country’s leader, Muammar Gaddafi. With his grip removed, the country has succumbed to a decade of nearly continuous multi-party strife with death, devastation and mass dislocation in its train. Currently, the political scene is dominated by the power struggle between two warring coalitions.

One, based in Tripoli, was installed by Washington and its allies, and has a nominal status as the internationally recognised government. The other, centred in the eastern city of Benghazi, is led by general Khalifa Haftar who won favour by defeating some of the jihadist militias that have flourished since Gaddafi’s death. The former is backed by Saudi Arabia, the United Arab Emirates and especially Turkey’s leader Recep Erdogan, who has transferred thousands of his al-Qaeda, ISIS and other militant proxies from Syria.

Tripoli itself is dominated by Islamists. Haftar has the backing of neighbouring Egypt, Jordan, Russia and France. Various tribal militia and jihadi movements roam the vast interior of Libya. The United States recently has equivocated in its support while urging the two sides to reach a modus vivendi — with little success. Question: Washington provides arms, directly or indirectly, to all of the above-mentioned parties — except the Islamist militias. Would its influence increase and its objectives have a better chance of being realised were those arms deliveries to include AI weapon systems?

THE Saudi-led slaughter and starvation of Houthis has depended crucially on the participation of the American military. Their campaign would have been impossible without US airplanes providing refuelling, US officers sitting at Saudi command headquarters to direct targeting and US intelligence. In addition, we provided the latest in ‘smart’ bombs and missiles. We also helped to enforce the blockade that denied food and medicine to the general population. The Saudi intention has been to coerce the Houthis into submission by causing as much misery as possible. Question: how would extensive employment of AI weapons systems have changed any of this? Would not the critical ‘targets’ be located in Washington, Tampa, and Riyadh which are readily accessible to non-AI assisted weapons?

THIS was a conflict between a country-wide insurrection and a massive counter-insurgency campaign. A major part of the American strategy aimed to deny the Vietcong sanctuary by denuding large areas of vegetation (Agent Orange) and forcing civilians out of broad swathes of territory declared as ‘free-fire’ zones. Would the possession of AI weaponry have altered in a substantial way the conduct of the war, casualty levels and the outcome? How?

THE carpet bombing of cities became the norm. It culminated in Hiroshima and Nagasaki. Civilian casualties in the earlier fire-bombing of Tokyo were nearly as high. It was apiece with the air raids against Hamburg and Dresden. They all shared the objectives of undermining the enemy’s morale, crippling industrial production — and satisfying the lust for revenge against German air assaults on London, Coventry, Rotterdam and Japanese atrocities. (As the invasion of Iraq was revenge for 9/11) Question: had we access to AI weapons at the time, would this thinking have been any different and actions otherwise?

Reflection on these questions leads us to three clear conclusions:

— Widespread deployment of weapons directed by artificial intelligence will have no appreciable change on decisions regarding the use of military force, the conduct of war or on its consequences.

— Reviewing the history of warfare, or restricting our consideration, to recent wars in the Middle East involving the United States, the fraction of civilian casualties that might be reduced by the use of AI weapons is very low. Those acts of war that produce the vast majority of casualties are not of a kind that allow for the large-scale substitution of AI arms.

(AI directed weapons will be developed, deployed and used at an accelerating rate nonetheless. In our post-modern age, any high-tech innovation associated with electronic gadgetry enjoys a presumptive claim to superior utility, value and virtue.)

— The innovation associated with AI arms, like drones and the volunteer army, could encourage military activism by promising fewer American casualties. The net result, though, could well be more net death and destruction in aggregate.

Many years ago, I attended the Republic Day ceremonies in New Delhi. I had a curbside seat for the parade led by Nehru and his cabinet along the grand Raj Path from the presidential palace, Rashtrapati Bhavan, to India Gate. They were followed by other dignitaries, floats, and then an impressive array of turbaned cavalry in magnificent attire. A spectacle worthy of an imperial durbar. Indeed, Lutyens had designed it all to honour the immortal British Raj.

At the very end of the procession, trailing the horsemen at a respectable distance, was a less glamorous squad of khaki-clad ‘sweepers’ who used straw brooms to clean up the manure left behind.

Today’s political world brings back memories of that occasion insofar as we are constantly presented with a huge litter of bullshit in the aftermath of the latest mega event, and lesser amounts after smaller events. The urgent recommendations in the AI report by the commission falls into the latter category, but lack nothing in pungency.

Overall, there is an imbalance of production and disposal. Shovelling capacity hasn’t kept up. The dilemma for commentators is being placed in the position of New Delhi’s ‘untouchable’ sweepers who are required to do the dirty work of keeping the public space clear of odiferous matter.

Repetition makes the task all the more irksome. It is as if the 800-strong Light Brigade, commanded by our home-grown Lord Cardigans, passes through daily on march to the Valley of Death. Yes — somebody has to do it, ‘untouchables’ don’t exist, and the best solution would be to stable the ‘horses.’ The chances of the last happening any time in the foreseeable future are nil.

I personally have taken leave. So, instead of a systematic dismantling of the report, I have followed the avoidance strategy of restricting myself to the few remarks and questions presented above.

The pitchmen for AI weaponry base their promotion on a mistaken conception of warfare. They presume that it is essentially instrumental in nature. It is not. Destruction, looting and brutalising civilians is an integral part of war — usually.

At the extreme, think of Attila the Hun, whose armies slaughtered and pillaged routinely, or Genghis Khan’s Golden Horde who did the same, or Timur whose calling card was a pyramid of skulls at the city gate, or the Nazis. For them, antiseptic warfare would have been anathema — taking all the fun out of it.

The passions of wars inspired by religion or other ideologies also bode ill for non-combatants: eg, the annihilation of Jericho by Joshua — obedient to orders from his commander; the Crusades; the 17th century’s Thirty Years War; the Islamic State’s recent rampage. Or the scourge of modern nationalism.

Were the Serbs shelling Sarajevo concerned about precision targeting? Would Radovan Karadzic or Slobodan Mladic have welcomed AI weapons as a solution to a moral dilemma that endangered their immortal souls?

In all of these instances, the very notion of ‘collateral damage’ was irrelevant.

Consortiumnews.com, February 24. Michael Brenner is a professor of international affairs at the University of Pittsburgh, USA.