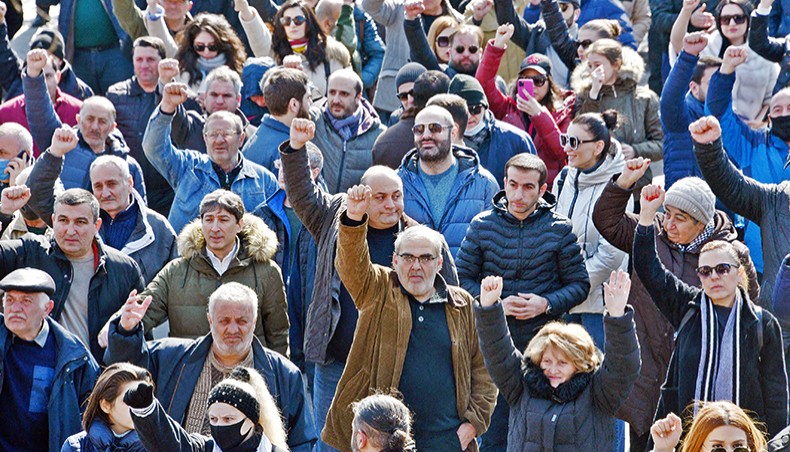 Opposition supporters rally outside the National Assembly building to demand prime minister Nikol Pashinyan’s resignation over his handling of last year’s war with Azerbaijan, in Yerevan on Friday. — AFP photo

Several thousand opposition supporters marched through the capital of Armenia on Friday to demand prime minister Nikol Pashinyan’s resignation over his handling of last year’s war with Azerbaijan which many see as a national humiliation.

Columns of people angry with the prime minister flooded the streets of central Yerevan, waving Armenian flags and chanting anti-government slogans, hours before a planned meeting with the ex-Soviet country’s president.

Former prime minister Vazgen Manukyan, who has been put forward by the opposition to replace Pashinyan, called on all Armenians to join the protest.

‘The people must take to the street and express their will so that we can avoid bloodshed and turmoil,’ he said at the rally.

‘Either we get rid of them,’ Manukyan said, referring to Pashinyan and his allies who control parliament, ‘or we will lose Armenia.’

The small South Caucasus nation plunged Thursday into a fresh political crisis as Pashinyan defied calls to resign, accused the military of an attempted coup and rallied some 20,000 supporters in Yerevan.

But the opposition gathered some 10,000 of its own supporters, who erected barricades and set up tents and stoves outside the parliament building and vowed to hold round-the-clock demonstrations.

The crisis spilled into a second day after Pashinyan’s critics spent the night, then blocked streets near the parliament building in preparation for Friday’s rally.

The march led them to the presidency and then to the prime minister’s residence, ahead of a meeting with President Armen Sarkisian at 15:40 local time (1140 GMT).

A leader of the opposition Dashnaktsutyun party, Gegham Manukyan, told reporters that opposition parties would only speak with Pashinyan about ‘his resignation.’

Pashinyan has said he is ready to start talks with the opposition to defuse tensions, but also threatened to arrest any opponents if they violate the law.

France on Friday urged talks based on the legitimacy of president Armen Sarkisian, who holds a largely ceremonial role but has vowed to resolve this crisis peacefully, and Pashinyan himself.

‘France would like that a dialogue takes hold in this country,’ Foreign Minister Jean-Yves Le Drian said after talks with Ukrainian counterpart Dmytro Kuleba.

‘The elements of Armenian democracy must be able to be preserved,’ he added.

Pashinyan has faced fierce criticism since he signed a peace deal brokered by Russia that ended the conflict over Nagorno-Karabakh, an ethnic Armenian region that broke from Azerbaijan’s control during a war in the early 1990s.

After six weeks of clashes and bombardments that claimed some 6,000 lives, a ceasefire agreement was signed that handed over significant territory to Azerbaijan and allowed for the deployment of Russian peacekeepers.

The agreement was seen as a national humiliation for many in Armenia, though Pashinyan has said he had no choice but to agree or see his country’s forces suffer even bigger losses.

‘Nikol’s time is over,’ Grigor Airapetyan, a 68-year-old pensioner, said at Friday’s rally.

‘So many young boys were killed, we suffered a defeat in the war and the country’s sovereignty has been weakened.’

Armenia’s military had backed Pashinyan for months, but on Thursday the military’s general staff joined calls for him to step down, saying in a statement that he and his cabinet were ‘not capable of taking adequate decisions’.