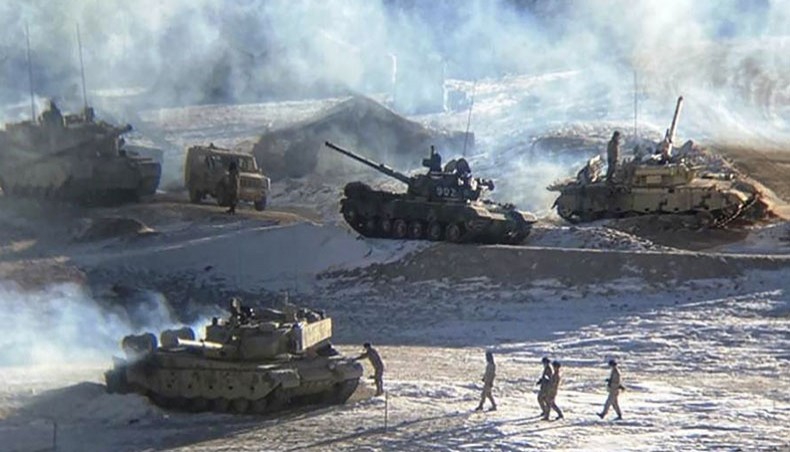 This undated handout photograph released by the Indian Army on February  16, 2021shows People Liberation Army soldiers and tanks during a military disengagement along the Line of Actual Control at the India-China border in Ladakh. — AFP File Photo

India and China’s foreign ministers discussed further de-escalating tensions at a disputed border after a pullback of troops in response to a deadly clash in 2020, New Delhi and Beijing said Friday.

The nuclear-armed neighbours fought a border war in 1962 and June, 2020 their worst skirmish in decades left 20 Indian troops and four Chinese dead on the inhospitable frontier between Ladakh and Tibet, the Line of Actual Control.

Both sides have sent thousands of extra troops and military hardware to the area since the clash.

But India on Sunday said the two countries had completed a ‘disengagement’ of troops and tanks from one part of the disputed zone around the high-altitude Pangong Tso Lake, following nine rounds of military talks.

In a 75-minute call with counterpart Wang Yi on Thursday, Indian foreign minister S Jaishankar said they ‘should now quickly resolve the remaining issues’, according to his office.

‘Jaishankar said that once disengagement is completed at all friction points, then the two sides could also look at broader de-escalation of troops in the area and work towards restoration of peace and tranquillity,’ a statement said.

Wang said the situation on the ground in the Pangong Tso lake area had ‘significantly eased’, according to a report from China’s official Xinhua news agency.

‘The two sides must cherish the hard-won progress, jointly consolidate the achievements and maintain the momentum of consultation, so as to further ease the situation,’ he was quoted as saying.

Xinhua reported that Wang said the border issue ‘is not the whole story of China-India relations, and should be placed in a proper position in their relationship’.

But he added that India ‘has vacillated and even moved backward over its policy on China, which has affected and disrupted bilateral pragmatic cooperation’.

The two sides said they had agreed to establish a hotline, although one is already in place between senior military commanders.