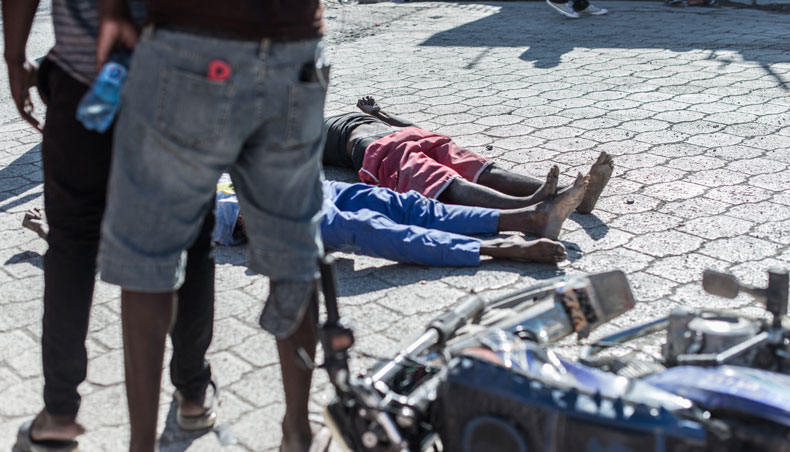 The bodies of two dead inmates lie on the pavement by the Croix-des-Bouquets prison from where many prisoners escaped and where several people were killed, in Croix-des-Bouquets, suburb of the Haitian capital, on February 25, 2021. — AFP photo

Multiple people were killed on Thursday in Haiti, including the director of a prison in the suburbs of capital Port-au-Prince, after several inmates escaped, police said.

‘Division inspector Paul Hector Joseph, who is in charge of the civil prison of Croix des Bouquets, was killed in the prison,’ Gary Desrosiers, the spokesperson for the Haitian national police, told AFP.

‘Multiple prisoners have escaped,’ he added, without specifying the number.

At least six people were shot dead in the streets near the prison, an AFP photographer observed. The victims’ identities could not be determined.

Around midday, inmates at the prison in the heart of downtown said they heard bursts of gunfire.

Employees at second-hand clothing stores located in a market adjacent to the prison told an AFP photographer that they were forced to give their merchandise to the escaped prisoners.

A large police force was mobilized to the prison, regaining control of the building in the afternoon.

In 2014, more than 300 inmates successfully escaped the high-security prison, which was built with Canadian funding and opened in 2012.