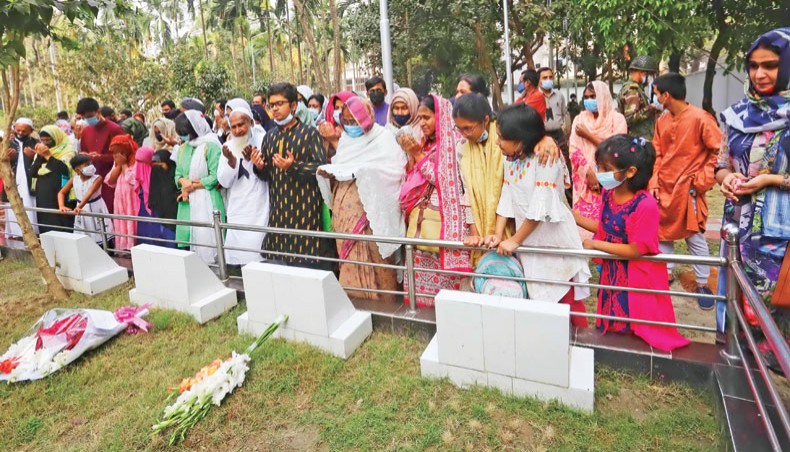 Families of military officers, who were killed during the BDR munity, pray for divine blessings for the salvation of the departed souls at the graveside at Banani Military Graveyard in Dhaka on Thursday. — Sourav Lasker

The 12th anniversary of the Bangladesh Rifles revolt of February 25-26, 2009 in Dhaka and elsewhere in the installations of the border force in the country was observed on Thursday with a fresh call for identifying the real plotters behind the carnage that killed 75 people, including 57 officers deputed from the army.

While paying tributes to the dead at their graves at the military graveyards in the capital, the family members urged a serious probe into the mutiny to identify the ‘real plotters’. They demanded punishment of the plotters and the convicts in the BDR mutiny case by completing all legal processes for bringing peace in their minds.

BDR was renamed and restructured as Border Guards Bangladesh in 2010.

BGB flags were flown at half-mast at all installations and all BGB members wore black badges to mark the day.

On February 25, 2009, several hundred paramilitary BDR soldiers took up weapons against their officers deputed from the army at the Durbar Hall during their annual gathering at the force’s headquarters in Dhaka.

The carnage began shortly after the mutineers gunned down their commanders, the then BDR director general, Major General Shakil Ahmed, as he stood on the podium to deliver his speech at the Durbar Hall.

The BDR personnel began the rebellion, as some of them claimed later, to realise the demands, including not sending army officers on deputation to the BDR as its commanders.

In the revolt that lasted for two days, 75 people were killed, including 57 army officers, wives of two army officers, nine BDR soldiers, five civilians, an army soldier and a police constable.

On the anniversary, floral wreaths were placed at the graves of the slain army officers at Banani Military Graveyard in the morning on behalf of president Md Abdul Hamid and prime minister Sheikh Hasina.

Later, home minister Asadduzaman Khan, the chiefs of the three services, and the BGB director general paid their tributes to the slain army officers.

The victims’ family members and relatives also paid their tributes to the slain army officers.

Slain army Colonel Quadrat Elahi Rahman Shafique’s son Sakib Rahman, who came to pay his tributes to the slain army officials at the Banani graveyard, demanded that a judicial enquiry commission should be formed to indentify the plotters and people who worked from behind the scene.

While talking to reporters he also urged the authorities to execute the court’s verdict immediately after completing all legal processes at the soonest.

After offering prayers and placing wreaths at the Banani graveyard, Bangladesh Nationalist Party vice-chairman Major (retired) Hafiz Uddin Ahmed urged the judiciary to complete all legal processes by the end of this year.

He urged the government to identify local and foreign plotters, publish their names and bring them to book.

The BGB headquarters in a press release said that special prayer sessions would be offered at the BGB central mosque, Dhaka sector mosque and Border Guard Hospital mosque at the capital’s Pilkhana after Jumma prayers today, seeking divine blessings for the departed souls.

Home minister Asaduzzaman Khan will be present as the chief guest at the BGB central mosque.

The death sentences of 139 BDR soldiers were upheld by the High Court in a two-day judgement on November 26-27 in 2017.

A total of 71 appeals filed by the government and the convicts challenging the High Court’s 2017 judgement are pending for hearing in the Appellate Division.