Clashes in Yangon as Myanmar nears month of military rule 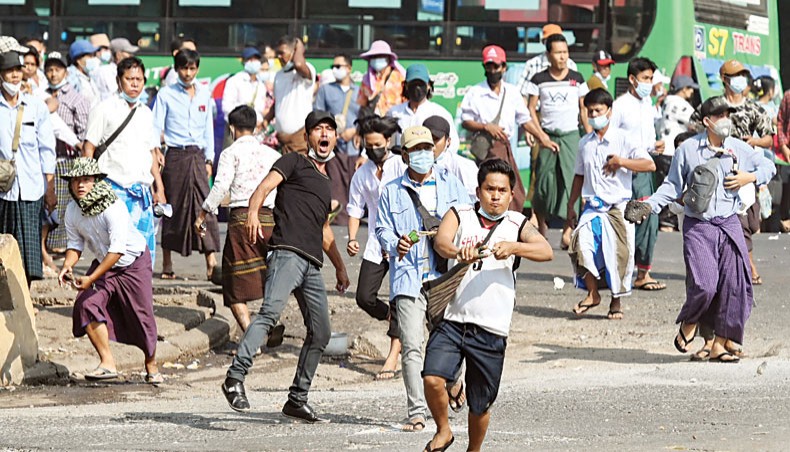 Pro-military supporters carry sling-shots and rocks as they throw projectiles at residents in Yangon on Thursday, following weeks of mass demonstrations against the military coup. — AFP photo

Junta supporters wielding knives and slingshots clashed with anti-coup residents in Myanmar on Thursday, the first such showdown between opposing forces as the nation nears a month of military rule.

Britain on Thursday slapped sanctions on six members of military junta, including commander-in-chief General Min Aung Hlaing, for involvement in the recent coup.

The UK government said the move was made because of their role in ‘overseeing human rights violations’ since they seized power on February 1.

The sanctions will prevent the six from travelling to Britain, while British businesses and institutions are barred from dealing with them.

The same curbs had already been imposed on 19 other military figures.

UK aid that could be used to indirectly support the junta has also been suspended.

Facebook said it has banned all remaining accounts linked to the Myanmar military on Thursday, citing the junta’s use of deadly force against anti-coup demonstrators.

The move, which takes effect immediately, applies to the military and entities controlled by the armed forces on both Facebook and Instagram.

It also bans ‘military-linked commercial entities’ from advertising on the platforms.

‘Events since the February 1 coup, including deadly violence, have precipitated a need for this ban,’ the social media giant said in a statement.

‘We believe the risks of allowing the Tatmadaw on Facebook and Instagram are too great,’ it added, using the Myanmar name for the country’s armed forces.

The country has been gripped by a torrent of anger, with hundreds of thousands taking to the streets nationwide to call for the release of civilian leader Aung San Suu Kyi and a return to democracy.

Some demonstrations have seen a steady increase in force from authorities — at least five people have been killed since the February 1 coup, while one police officer died in a protest, according to the military.

Authorities granted them access to Sule Pagoda, a local landmark at a key junction that in recent days was barricaded to prevent anti-coup protesters from amassing.

They fought back, detaining a number of people until police appeared to remove the alleged attackers.

‘They have the right to protest but they should not have used weapons — none of the pro-democracy demonstrators use it,’ Zaw Oo said, bruised on a rib after he was held down by a group of assailants.

‘They are the bullies.’

‘What we want is just to see this illegitimate government collapse,’ said a pharmacist.

The so-called ‘White Coats Revolution’ is part of a nationwide civil disobedience movement that has shut down key sectors across Myanmar — including hospitals, schools, and banks — in revolt at the junta.

Disparate strands of Myanmar society have united in protest at the coup, which ended a 10-year experiment with democracy as Suu Kyi was detained in a dawn raid.

Protesters have been creative in showing dissent, with anti-coup tattoos and violinists performing revolutionary songs at demonstrations.

On Thursday protesters in Mandalay, Yangon and even remote Magway applied thanaka — a traditional tree bark paste used as sunscreen — on their cheeks in the design of a three-finger salute, a symbol of resistance.

The military has weathered rounds of international condemnation, justifying its power grab by alleging widespread fraud in November elections, which Suu Kyi’s party had swept.

The World Bank also confirmed it had told the regime all lending would be cut off from February 1 onwards ‘as a result of recent developments’.

More than 720 people have been arrested, charged or sentenced since the coup, according to the Assistance Association for Political Prisoners monitoring group.

They include Australian economist Sean Turnell, an advisor to Suu Kyi — whose spouse wrote to the wife of junta leader Min Aung Hlaing to plead for her husband’s release.

‘I am writing this personal note to you, Daw Kyu Kyu Hla, from one wife to another wife,’ Ha Vu wrote in the letter seen by AFP.

‘I plead you to speak to your husband to let my husband return home to my family in Australia.’